The summer of 2019 is at its end, which means it’s time to take a break from all my posts about 2018's summer vacation trip to write something about this summer’s vacation trip: Puerto Vallarta. Puerto Vallarta (which itself is located in the Jalisco state, although a lot of the newer resort development is occurring in the Nayarit state directly to the north) is my favorite Mexican vacation spot, which makes it somewhat surprising that this was my first trip there in over a decade. 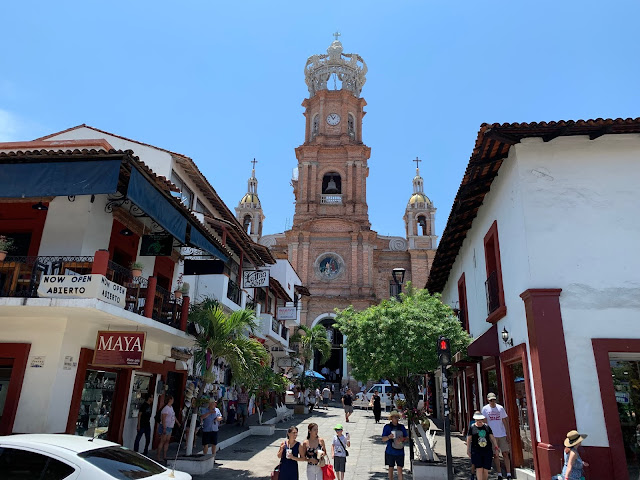 The Church of Our Lady of Guadalupe features a wrought-iron crown atop its bell tower. It is located in the center of the city; it is an easily-recognizable landmark as well as a symbol of Puerto Vallarta. 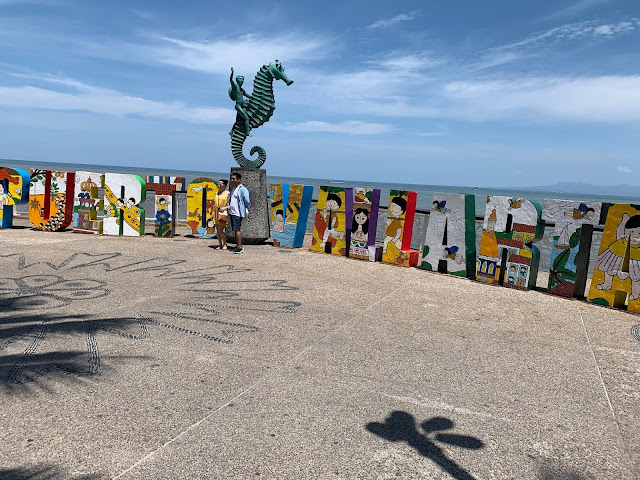 Another symbol of Puerto Vallarta is the Seahorse Monument, or "El Caballito," located along the seawall. The painted letters are a more recent addition. 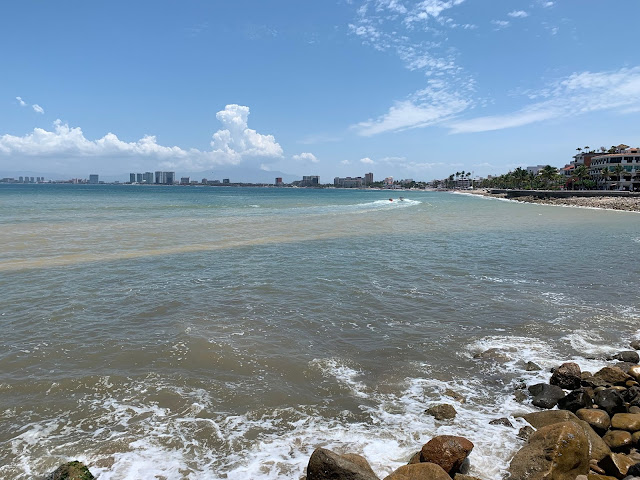 A view of the water from the Puerto Vallarta seawall, or "Malecón." Puerto Vallarta sits at the eastern end of Banderas Bay, which is part of the Pacific Ocean. That means the sunsets are awesome. 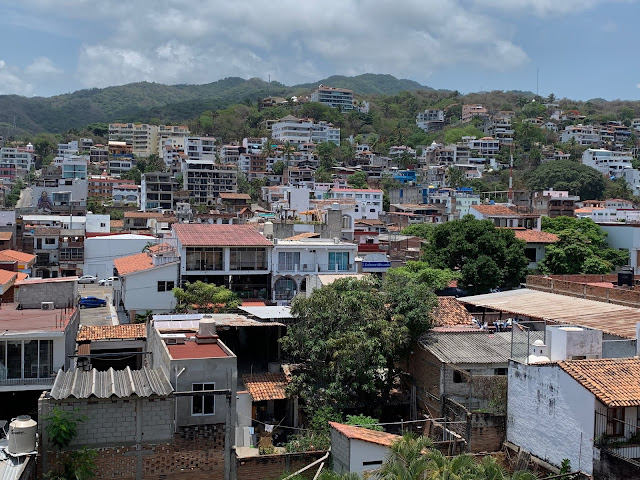 A view of Puerto Vallarta's hillsides from our waterfront timeshare. In addition to being a resort, Puerto Vallarta is also a top retirement destination. Some of those properties on the hills sell to American expats at rather substantial prices. 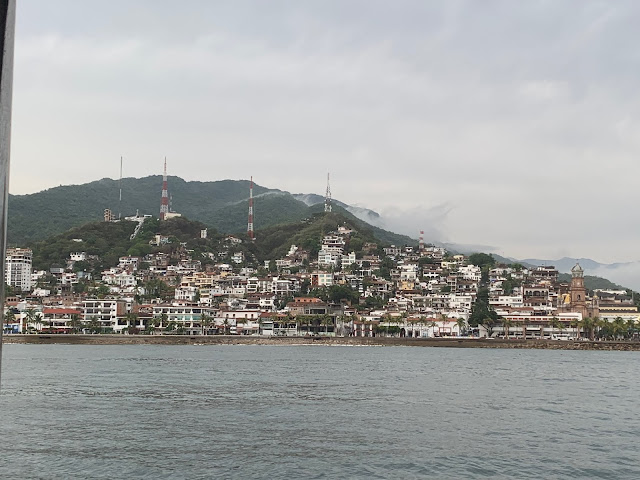 A view of Puerto Vallarta from the sea, featuring the Church of Our Lady of Guadalupe to the right. Puerto Vallarta occupies a relatively narrow bit of land between the sea and the mountains, and the dramatic topography is part of the city's charm. 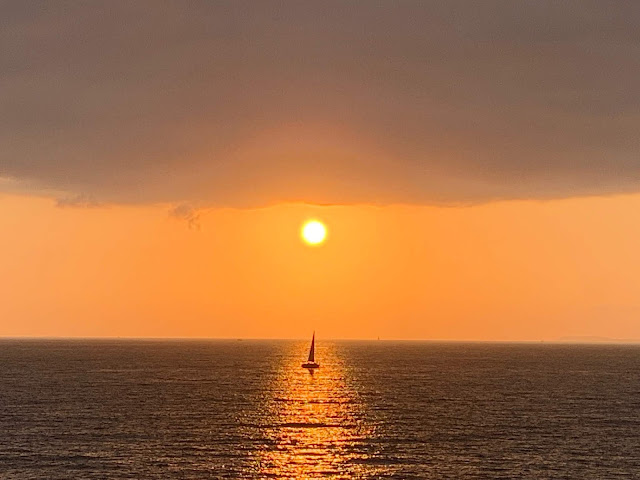 As I said in a previous picture, Puerto Vallarta's location on the east end of Banderas Bay means that it is the perfect Pacific sunset-watching locale. I took this picture from the balcony of my timeshare, and I waited until the sailboat was in the perfect spot. Sometimes I'm a decent photographer. 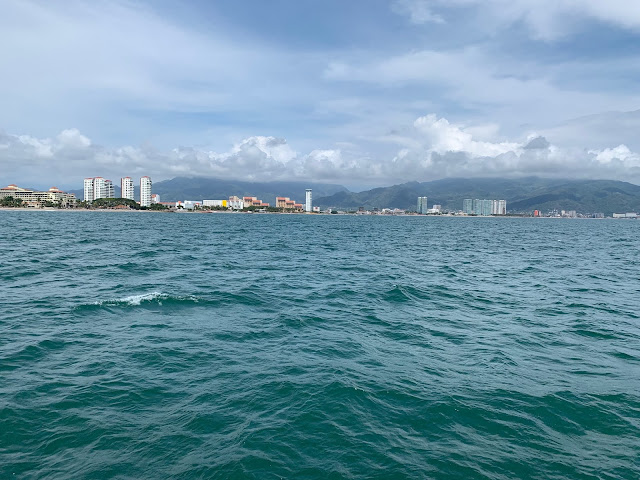 Another view of Puerto Vallarta from the sea. The construction of high-rise hotels and timeshares continues apace, especially on the north side of the city.

While Corinne, Kirby and I were in Vallarta, we spent the week eating, drinking, sleeping, soaking in the pool, sitting on the beach, and looking at sunsets. In other words, we had an ideal vacation.

Updated Puerto Vallarta Dining Guide:
Back in 2007, I wrote about my impressions of Puerto Vallarta restaurants that I enjoyed (or thought were overrated). Some of the restaurants I listed in that post are gone, others have moved, others have changed names. I've decided to update and distill my Puerto Vallarta restaurant list to five establishments that have stood the test of time (I’ve eaten at each of them at least twice) and are, in my opinion, among the most reliable and highest-quality dining experiences in Puerto Vallarta. This is not to say that any of these five places are the "best" restaurants in PVR, but you can't go wrong by eating at any of them.
Rio Grande (Av. Mexico 1175): They serve all kinds of dishes here, but seafood is their specialty (especially red snapper!). Good service and reasonable prices.
La Bodguita del Medio (Paseo Díaz Ordaz 858): The Puerto Vallarta location of this Havana-inspired restaurant has been a local fixture for many years. They have all your Cuban favorites: sandwiches, pork, rice, black beans, plantains and - yes - amazing mojitos. They have live music in the evening, so it can get loud. They sell cuban cigars, too.
The Pancake House (Basilo Badillo 289): This place was called Memo’s Pancake House at one point. It’s reverted to a more generic name, but it's just a good as I remembered. You’re going to have trouble finishing the stacks of big, fluffy pancakes that come in a variety of preparations, such as the “Black Forest” pancakes with chocolate and strawberries topped with whipped cream. They also have waffles, omelets, and Mexican breakfast specialties such as heuvos rancheros, huevos Mexicana, or Chilaquiles. Open until 2 pm.
El Andariego (Av. Mexico 1358): Good food, good service, and you get to sample their in-house tequila. What's not to like? Their murals are pretty cool, too.
The Blue Shrimp (Olas Altas 336): Since my last trip, this establishment has moved to a new location along the beachfront in the Zona Romantica (they've also opened a second location in Nueva Vallarta). They still offer shrimp prepared a variety of ways, as well as excellent cocktails and appetizers. This is not the cheapest place to eat in town, but you will not leave hungry.
Honorable Mention: pretty much any street taco stand. You obviously can’t go wrong if you eat where the locals eat, and there's just nothing better than a plate of authentic tacos al pastor. Two of my favorites are Tacos el Punto (Av. Mexico 1225) and El Carboncito (Calle Honduras 127); these are around the corner from each other and I'm familiar with them because they are close to my timeshare. Just be aware that many of these places don’t speak much English or accept anything other than cash.
I’ve also heard good things about El Barracuda, but I didn’t get a chance to eat there this time around (which is a shame because it was literally just down the street from my small timeshare). Guess that just means that I’ll go back.
Be aware that many restaurants will have people out in front of them, wielding menus and trying to get you to eat there as you walk by with the promise of a special drink or free appetizer. This practice can be annoying, but does not necessarily suggest anything about the quality of the restaurant (e.g. "that place is so bad that they have to beg people to eat there!"). It is simply a function of intense competition for tourist pesos in a city with a lot of restaurants. (Truth be told, I am convinced that you really have to try to find bad food in Puerto Vallarta.)

This practice is especially prevalent along the Malecón (which they improved since the last time I was there; what used to be a busy street along the waterfront is now a wide pedestrian promenade). The guy in front of El Jardin de Pancho Villa (Paseo Díaz Ordaz 732) discovered we were from Texas (he said he grew up in east Austin) and harangued us every day until we finally relented and ate there. It turned out to be a good place to stop for nachos and margaritas, which were pretty strong for their price. However, there was another establishment further down the seawall (towards the church and town square) that we ate at after being given a voucher for a free appetizer. The food was decent, but I can’t recommend this place because a so-called "tour operator" approached our table several times over the course of our lunch. I have a huge problem with restaurants that allow timeshare reps to disturb their customers while they are eating. Speaking of which...

As I've previously explained, timeshares are a big deal in Puerto Vallarta. This is not necessarily a bad thing - the reason my family and I have cumulatively spent so much time in Puerto Vallarta is because of the three timeshare properties World InternationalVacation Club operates in the city. Puerto Vallarta relies on tourism, and timeshares are an important part of that industry. That being said, for a while the timeshare wranglers were as annoying as they were ubiquitous; it was impossible to walk down the sidewalk without being accosted by multiple people aggressively offering you "free" tours or dinner cruises or tequila or other gifts: all you had to do to get them was subject yourself to an hours-long, high-pressure sales pitch aimed at getting you to spend tens of thousands of dollars on unit-week at a local resort.
On this trip, however, the aforementioned encounter at the restaurant was one of the more egregious timeshare pitches I experienced. Maybe it’s simply because I’m more wary of the timeshare wranglers and go out of my way to avoid them, or maybe it's because the timeshare industry has generally evolved, but there just didn’t seem to be as much "in-your-face" timeshare-pitch activity this time around. There were fewer wranglers manning kiosks along Avenida Mexico or the seawall approaching tourists as they walked by. There also didn’t seem to be as many tequila shops offering “free” bottles of tequila. In fact, there were plenty of establishments with signs saying “NO TIMESHARE” at their entrances, suggesting an awareness that tourists had become weary of these gimmicks.
To be sure, there is still the “timeshare gauntlet” at Puerto Vallarta’s airport. This is a room between the customs area and the ground transportation/exit area that arriving passengers are forced to walk through as they leave the terminal and where timeshare wranglers aggressively pitch “free” hotel transportation to incoming passengers. I find it rather obnoxious that something like this was designed into an airport's physical layout, but it is what it is. The best way to deal with the gauntlet is to walk with your baggage as quickly as possible, make no eye contact, and politely say “no thank you” to the people asking which hotel you’re staying at.

This particular trip was my first experience using Southwest's international services out of Hobby. I have no complaints about that service - Southwest isn't fancy, but it is reliable - or customs at Hobby. My only gripe is the customs and immigrations setup at Puerto Vallarta's airport: it is very slow, and in combination with the timeshare gauntlet, makes the airport an exasperating experience.

But Puerto Vallarta itself is worth it. So I'll keep going back.
Posted by Thomas at 11:57:00 PM