Yesterday ESPN College Gameday came to the University of Houston for the very first time. Kirby and I went up to campus to check out the festivities, as they were. 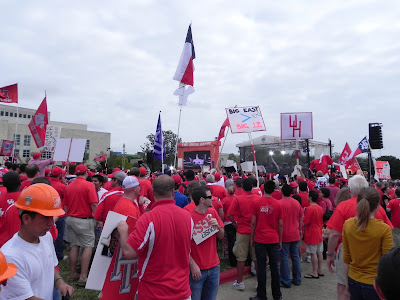 Early in the morning, some posters on UH message boards were wringing their hands about what the perceived as a "sparse" crowd behind the College Gameday set, which they felt looked bad on television. However, by by the time we got there shortly after 10 am, the crowd was pretty decent. 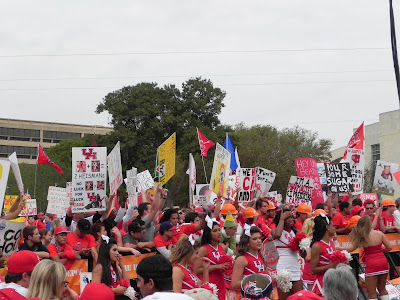 Here's another view of the crowd right behind the College Gameday set. Houston's cheerleaders were prominently featured, but SMU's cheer squad was also in attendance made it on TV as well. 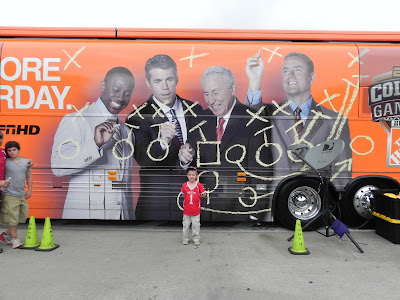 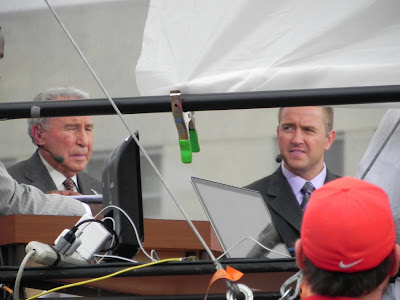 This is as close as I could get to the set itself. That's Lee Corso on the left and Kirk Herbstreit on the right. 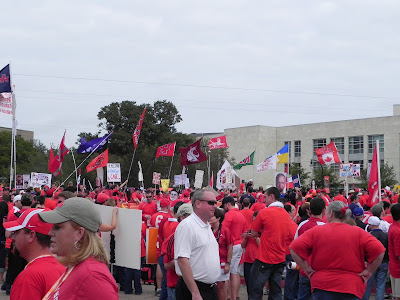 One more crowd shot. The maroon Washington State flag in the center somehow makes its appearance at every ESPN College Gameday show every Saturday. 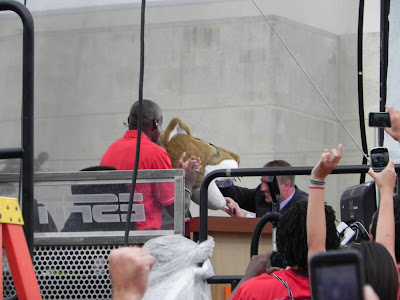 In a moment that will go down in University of Houston Cougar lore, at the conclusion of the broadcast Lee Corso uttered an expletive before he put on the Shasta head and predicted Houston to defeat Southern Methodist. We weren't standing in front of a speaker, so we didn't hear it at the time (which is probably a good thing for Kirby's sake), but the incident quickly made it on to YouTube. The reaction from the rest of the ESPN crew (as well as UH track legend Carl Lewis, seen wearing red in the picture above) is priceless (language warning):

Corso later went back on television and apologized for his outburst.

The Cougar nation also got some national props for "the coolest kid ever," the son of a former UH player who dressed up as the Heisman Trophy.

As it turned out, Corso's profanity-laced prognostication was correct. That afternoon, the Cougars convincingly defeated SMU, 37-7, to notch their eleventh straight victory of the season. This Friday the Cougars will square off against Tulsa, with the winner capturing the Conference USA Western Division.

Only time will tell when, or even if, ESPN College Gameday makes another visit to the University of Houston campus. But yesterday's event was a real treat, and the publicity was a real boon to the school, its students, its fans and its football program. Go Coogs!
Posted by Thomas at 4:31:00 PM No comments:

I'm wondering if I should include this game on my list of the top ten upsets in college football history, should I ever decide to update it. The Cowboys went into Ames as 27-point favorites. They leave with their national title hopes likely crushed.

Granted, Oklahoma State was playing one day after their women's basketball coach, Kurt Budke, was killed, along with three others, in a plane crash. That may have affected the team's focus. It's also possible that the Cowboys were looking past a 5-4 Iowa State team and were thinking about their big showdown with Oklahoma the following weekend.

But still: with a shot at the national title on the line, the Cowboys should have taken care of business. It just goes to show that anything can happen in college football, and that making it through the regular season undefeated is a rare feat indeed.

Which is why I'm worried about the Cougars against SMU tomorrow...
Posted by Thomas at 11:47:00 PM No comments:

The Astros in the American League

Pardon me while I vomit:

As part of the agreement, the Astros will be moved to the American League West in 2013, with Crane getting a $70 million discount on the sale price of the team. That will even out baseball’s two leagues at 15 teams apiece and allow for the fair implementation of two additional Wild Card spots. It also means that interleague play is going to be a year-round thing.

I knew this was coming as part of the sale of the franchise to the new owner, and I understand Major League Baseball's desire to equalize the number of teams in the two leagues (the National League currently has 16 teams while the American League has 14). But, as somebody who grew up a loyal follower of the National League, I don't like it.

I don't like the designated hitter. It takes a lot of strategy out of the game.

I don't like the fact that the Astros will be giving up their long-standing divisional rivalries against teams like the Cardinals, Cubs and Reds and replacing them with new divisional "rivals" like the Angels, A's and Mariners.

I don't like the fact that playing those new divisional "rivals" on the road means 9 pm start times for television.

I don't like the fact that the presence of insufferably arrogant Yankees and Red Sox fans will now be an annual occurrence at Minute Maid Park.

I don't even like the fact that the Astros will get to play the Texas Rangers more often since both teams will now be in the same division. The two teams already play each other every year anyway. Big deal.

To be fair to new owner Jim Crane: the move was forced on him. He didn't have a choice.

Of course, if he can't breathe some life back into the moribund team, which lost a franchise-record 106 games last season, it really won't matter which league the Astros are in because they won't be worth watching anyway.

The Astros will move to the American League beginning in the 2013 season.
Posted by Thomas at 11:12:00 PM No comments:

Time to breathe some life back into this blog.

I had actually started several posts over the last month and a half - about the death of Steve Jobs, about the Cougars, about the tragedy that has occurred at Penn State - but for whatever reason I never got around to finishing any of them in a timely manner. I just been too busy or too lazy to put up any new entries, hence the lack of recent posts.

But enough excuses. I want to take a few minutes to gloat about the University of Houston Cougar football program, which is having its best season since the Run and Shoot era of the late 80s.

Right now, they are 10-0 and are only one of three undefeated teams remaining in FBS (LSU and Oklahoma State being the other two). They are ranked #11 in the BCS standings; if the Coogs manage to win the rest of their games (SMU this weekend, at Tulsa the day after Thanksgiving, and then the C-USA Conference Championship, most likely at Robertson against Southern Mississippi) they are assured of a spot in one of the BCS bowl games. QB Case Keenum's name is beginning to reappear in Heisman conversations. This is happening even as rumors of impending announcements regarding Houston's move to the automatically-qualifying Big East conference and groundbreaking for a new stadium continue to circulate.

Oh, and did I mention the ESPN College Football Gameday is coming to Houston this Saturday for the first time ever?

Indeed, it's an amazing time to be a UH football fan. One decade after the infamous 0-11 season that marked the low point of Cougar football, the Coogs have a chance to end the regular season undefeated and "bust the BCS." But the road ahead is not going to be easy. SMU knocked off TCU earlier this season and has a potent offense. Tulsa has a mobile quarterback in D. J. Kinne that is sure to give the Houston defense fits and road games are never easy. And Southern Miss, should the Cougars meet them in the conference championship, is 9-1 and is ranked #20. The team can see the promised land off in the distance, but it's going to be an uphill climb to get there.

This is to take nothing away from the season that the Coogs have had so far. I've enjoyed every minute of it. But now that they've gotten this far, there would still be a sense of disappointment if they didn't finish the journey. It's all in their hands.