My Southwest flight from Miami to Houston a couple of weeks ago made a stop in New Orleans, and our final approach into MSY took up over the heart of the Big Easy.

This picture would have been better had it not been for the reflection from inside the cabin, and there was no way I could take it without also getting the front of the airplane's engine. But I took it anyway, because I normally don't approach MSY from this direction and the clear evening provided a great view of the city: 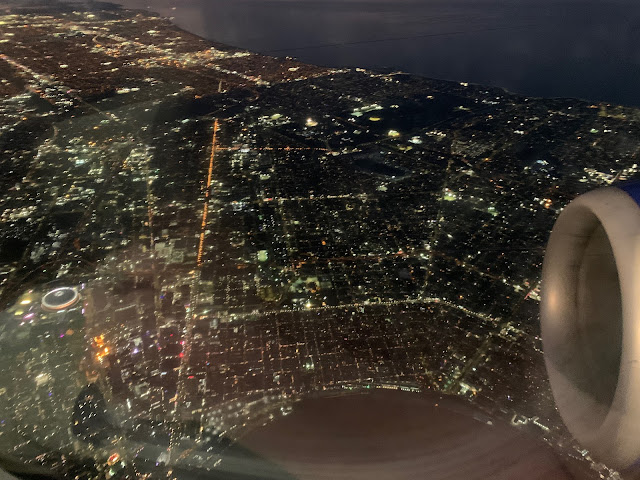 The circular building on the far left is the Superdome, and Canal Street runs vertically through the left of the picture. The French Quarter is in the lower center, bounded by Canal to the left, Rampart to the top, and the Mississippi River at the bottom. Tremé is in the dead center of the photo, and Marginy is the neighborhood closest to the engine. You can even see the Lake Pontchartrain Causeway at the top of the photo.

Cougars lose to SMU in shootout, then get past Temple in a nail-biter

I've been very busy these past few weeks: back-to-back weekend weddings in Louisiana, a trip to Miami for a conference, and tomorrow Corinne and I are going to Italy (!) to visit some of her family for Thanksgiving. So I haven't had a lot of time to write about UH football. Some quick thoughts about the last two games:

The combined 140 points in this game set the NCAA single-game scoring record for two teams in regulation; for purposes of comparison, the score of the most recent basketball game between the two schools was Houston 75, SMU 61.

I don't know why neither team decided to play defense - I wasn't playing close attention to this game because I was watching another Houston sports team that evening - but the end result was a loss that Ryan describes as "hard to digest."

Houston 43, Temple 36: Vegas had the Coogs favored by 20 in this game, but the Owls didn't get the memo. They pulled out all the stops, even scoring on a fake field goal attempt, and kept pace with the Cougars the entire game. Temple actually took a one-point lead with 1:22 left in the game; however, Clayton Tune found wide receiver Matthew Golden open for a beautiful 44-yard touchdown pass with 40 seconds left to seal the UH victory.

A bright spot for Houston was RB Stacy Sneed, who rushed for 143 yards and two touchdowns.

Coming off the previous week's shellacking at SMU, Houston's defense gave up 533 total yards to Temple in this game. Before the season began, UH defensive coordinator Doug Belk was being hyped up as a future head coach. Once the season ends, he's likely to find himself unemployed.

What It Means: The Cougars are now bowl-eligible with two games left to play in the 2022 season.

Due to my upcoming trip, I will not be able to watch or attend either of the final two games. If I had to guess, the Coogs will lose at East Carolina and defeat Tulsa at home to end with a very mediocre 7-5 record. Then it's on to a minor bowl game.

This is not what anybody expected when the season started, and it's certainly not a harbinger of success as the program moves to the Big 12 next year.

Although it's old news at this point, I want to belatedly acknowledge the Astros' second World Series championship.

To the extent that there is such a thing as a "must win" sports title, this was it. A third-straight World Series loss would not only have been a grave disappointment, considering how well the team did this year, but it would also have solidified the "the Astros can't win unless they cheat" narrative from the team's legions of haters across the nation.

This championship puts the sign-stealing scandal that tainted the Astros' 2017 title firmly in the past, and proves that the Astros in their current iteration are a team that can cleanly win it all. The haters can continue to hate, but they can't put an asterisk next to this championship. This one is legit.

Of course, it was also important for the Astros to win one for Dusty. Dusty Baker is a Hall of Famer regardless, but he needed that World Series win as a manager to round out his storied career.

Finally, for longtime fans, this World Series title heals a wound that goes all the way back to the 1980 NLCS, when the Astros lost to the Phillies in heartbreaking fashion. Twice, they were six outs away from their first World Series appearance. And twice, they choked. 42 year later, the franchise gets a measure of revenge on Philadelphia.

To be honest, I wasn't particularly optimistic about the Astros's prospects for victory in this Fall Classic, because they were facing another NL East team that was red-hot coming into the World series, just as the Nationals were in 2019 and the Braves were in 2021. And indeed, after Justin Verlander's meltdown in Game 1, and again after Lance McCullers, Jr got blasted for five home runs in Game 5, I got that feeling of dread familiar to every Houston sports fan.

But the Astros imposed their dominance in amazing fashion - the Game 3 no-hitter (only the second no-no in World Series history!), Chas McCormick's amazing home-run-robbing catch in Game 5, Yordan Álvarez's monster three-run blast in the deciding Game 6 - and won it all in front of their fans at Minute Maid Park.

Justin Verlander finally got the "no wins in the World Series" monkey off his back. Jermey Peña became the first rookie position player to win World Series MVP. Trey Mancini winning a World Series after battling colon cancer. There's no shortage of happy stories with this team.

Since the 2017 season, the Astros have won five AL West titles, have gone to the ACLS six times in a row, have gone to the World Series four times, and have won it all twice. This is the longest sustained period of success in Houston sports history, so much so that the team is now being described as a "dynasty."

So congratulations, guys. You've made us proud.

Here's a compilation of the top ten plays of the 2022 World Series:

A homecoming victory over a struggling South Florida squad has the Cougars just one win away from bowl eligibility.
The Good: Quarterback Clayton Tune passed for 380 yards and four touchdowns. Tune becomes the 3rd quarterback in UH history to pass for 10,000 yards in his career. Freshman running back Stacy Sneed ran for sixty yards, including the first two touchdowns of his career.
The Bad: The Cougars started the game a bit sluggishly. After scoring first, the Coogs let the Bulls rack up two unanswered touchdowns to briefly take the lead. Penalties continue to be an issue for the Cougars as well. They were flagged 10 times for 95 yards.
The Cougar defense gave up a rather disappointing 429 total yards of offense to the Bulls. Fortunately, the Bulls were not able to convert those yards into points; they were only one of four on 4th down conversions, and USF's final score was in garbage time.
What it Means: Houston is on a three-game winning streak, and needs only one more win to become bowl-eligible.
Next up for Houston is a trip up I-45 to play SMU.
Posted by Thomas at 10:16:00 PM No comments: