During my brief trip to Washington, DC on Saturday, I went to the Smithsonian's National Museum of American History and took in their extensive and impressive America on the Move exhibit.

I came upon this picture, and its caption, at a section of the exhibit that focused on the Interstate Highway system. If you're from Houston, you'll immediately notice the problem: 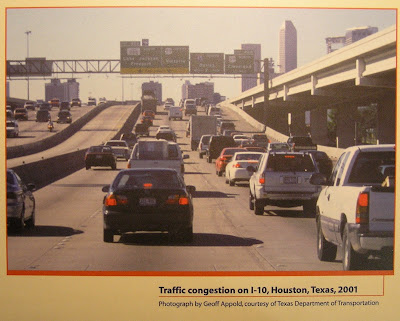 For those of you who don't recognize the error: the caption is wrong. That is not a picture of I-10. That's I-45 (the Gulf Freeway) northbound at Scott Street, headed towards downtown. It's clearly identified as I-45 by the third gantry sign from the left. And I'm very familiar with this particular stretch of highway because I drive it almost everyday (a huge bottleneck, by the way, but that's a subject of a future post).

Yes, it's nit-picky. But. The Smithsonian is one of the most prestigious, most respected and most well-funded archival institutions in the world. It's safe to say that people assume their exhibits to be well-researched and completely accurate. But if they get a little detail like this wrong, then what other tidbits of information in their otherwise intricate and well-presented exhibits are incorrect?
Posted by Thomas at 11:32:00 PM No comments:

I just got back from a short weekend trip to DC to visit my friend Laura (and, rather serendipitously, my cousin Eugene) and to see some attractions. Pictures will be up shortly, but I wanted to briefly gloat about something that happened on the trip home this afternoon.

It just so happened that on today, the last day of my OnePass Silver Elite status (earned through all that travel to Dubai I endured during 2008; I lose said status on March 1st), Continental decided to bestow upon me an unexpected perk: they upgraded me to First Class on my flight from Reagan National back to Bush Intercontinental.

Now, I'm not saying that three hours sitting among the aristocracy and being pampered with free drinks, free DirecTV, a large leather seat that actually reclines and delicious gourmet food made all those hours languishing in coach to and from Dubai worth it, but it sure was fun and now I can at least say I got to experience it.

I don't know if I'll ever be able to afford to fly First Class on my own, but if I one day can, I definitely will.
Posted by Thomas at 11:07:00 PM No comments:

Why does NBC's Olympics coverage suck?

Fourteen years ago, I wrote this Daily Cougar article about NBC's lousy Olympics coverage. Replace "Atlanta" with "Vancouver" and it's just as relevant and accurate today, because NBC is still using their same tired and irritating Olympics broadcast formula: reliance on tape-delay for much of the action (the folks on the Pacific Coast - i.e. the time zone where the Olympics are actually happening - aren't getting any live coverage at all); abridged coverage focusing on American athletes, even if they completely suck at the sport they're competing in; the ever-annoying Bob Costas; the incessant commercial interludes; and the inane "human interest" stories sprinkled throughout the actual sports coverage (this evening they even interrupted Olympics coverage to present us with a story about a blind sled dog!).

The mere structure of the NBC coverage has left a great deal to be desired this time around, and it came to a head last night when they shuffled the much-anticipated USA-Canada hockey game off to MSNBC, in part to use NBC as a showcase for probably the least anticipated of the figure skating events: ice dancing. (Along with some speed skating, bobsled, and the men's super-G, which happened earlier in the day -- oh, and the much-hyped ski cross event.)

The basic problem with NBC's coverage is that they haven't improved the fundamentals of the coverage in spite of massive changes in the way people take in content. The prime-time coverage is largely as it's always been: a few events (including figure skating) are heavily showcased, a few other events (most skiing and speed skating fall into this category) are usually shown in an abbreviated format regular viewers instantly recognize as "USA-Plus" (meaning you see the Americans, plus a few other people who are relevant because they either do very well or wipe out spectacularly), and two events -- hockey and curling -- are shown as complete events, but they're shoved off to cable.

Needless to say, NBC's coverage of the 2010 Winter Olympics has been a source of outrage throughout the interwebs. The practice of showing many events on tape-delay, rather than as they happen, has been a particular point of ire. Thanks to the internet, after all, everybody can find out who won an event in real time. NBC's practice of videotaping events which happen earlier in the day and then broadcasting an edited version of the competition during prime time is as insulting to sports fans as it is antiquated. So why do they continue to do it? As Deadspin's Dashiell Bennett explains, NBC does it simply because they know that they can get away with it:

NBC claims that most Americans don't care if the broadcasts are live, and that's probably true. Most of them work during the day and can only watch at night, so it honestly makes no difference to them when the sports were recorded. NBC caters to those folks, because they believe the Olympics are sports for people who don't care about sports. The outrage is coming mostly from sports fans, who are obsessed enough to follow live scoreboards during the day and DVR events they can't be home for and know that sports provide enough real drama that it doesn't need to be manufactured by highlight packages. They love sports enough that they will watch imperfect coverage of pre-taped events. Why break your back making them happy?

The people NBC needs to woo aren't sports fans. They broadcast the Olympics for people who like stories about polar bears and gymnasts with rare diseases and speed skaters whose sisters have cancer. Yes, these people are out there and to justify the insane investment dollars they have to watch too. It's a mini-series that happens to have some sports in it.

Maybe so. But as NPR's Holmes argues, that's just not the way people, whether they be hardcore sports fans or casual viewers, are going to watch events such as the Olympics anymore:

This just isn't the way people follow ... anything, really, at this point. At one time, you could broadcast events hours after they happened, and you'd have a reasonable chance that people could live in a bubble while they were waiting. That is not the world we live in anymore. The fantasy that is indulged when Bob Costas speaks breathlessly about an upcoming ski race where he already knows exactly what happened is no longer even a fragile fantasy; it's a blatant fiction that everyone knows about.

Naturally, NBC wants to kick the big events into prime-time for ratings reasons, and it's hard to argue with their ratings successes for these Olympics, which have been massive. Nevertheless, they're clinging to a broadcast model that's not only on its last legs -- it's on the last toe of the last leg. This isn't Wide World Of Sports -- people don't want to wait around for when your big sports show happens to take place.

In defense of their coverage, NBC has argued that "you can't please everyone" and mention the fact that 1980's "Miracle on Ice" was shown via tape-delay, as if that somehow justifies the practice thirty years later. Bennett counters and offers a compromise:

However, if the "Miracle on Ice" happened today and it hadn't been available to watch live, 30 Rock would be burned to the ground and Jeff Zucker would put to sea on a barge. "You can't please everyone" isn't an excuse to not try. Set aside sports networks for sports. Partner with ESPN, Versus, and the Golf Channel if necessary, and show everything live that's possible to show live. Then later that evening, the casual, human-interest obsessed viewer can still tune in and enjoy a night of spoiler-free Olympic television. The network is giving away the results on its own website ("live blog" does not equal "live coverage", btw) so there is no justification for maintaining the surprise.

The casual fan would never notice the difference and sports fans everywhere would love them for it. It wouldn't be that hard to please everybody, if only NBC would try.

Yeah, but they won't. NBC will stick to their craptastic formula for as long as the ratings say it works. Which is why I guarantee you that NBC's coverage of the 2012 Summer Olympics from London will suck just as much as their current and previous efforts.

It's tax season, and H&R Block is currently running an advertising campaign promoting their services. One of their featured services: they'll prepare your 1040 EZ for you for "only" $39.

At first, this disturbed me.

First, it saddens me to think, as H&R Block obviously does, that there are actually people out there that lack the basic skills necessary to complete something as ridiculously simple as a 1040 EZ.

Secondly, $39 to complete something as easy as a 1040 EZ is a complete and total rip-off.

But then I realized something: if you're too stupid to prepare a 1040 EZ on your own, then you deserve to get ripped off when you pay for somebody else to do it for you. Something about a fool and his money being quickly parted.