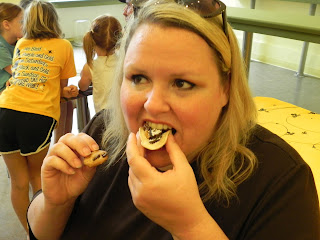 Here's my girlfriend Michelle, eating mealworm salsa and chocolate chip with cricket cookies at the Audubon Insectarium in New Orleans earlier this month. While I don't think she'll ever become an enthusiastic insect eater, I give her credit for at least trying it out. 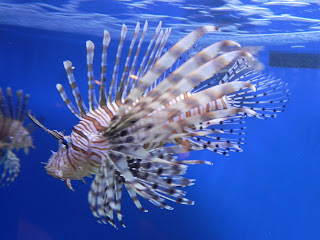 Michelle wasn't as impressed with the Insectarium as she was with the nearby Aquarium of the Americas. She's says she's more of a fish person than a bug person. With the aquarium featuring specimens like this lionfish, who can blame her? 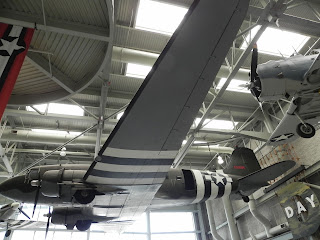 As a history teacher, however, I think she was most impressed by the National World War II Museum. I hadn't been there since 2000 myself, when it was still known as the D-Day Museum. The museum has undergone quite a bit of expansion since then (and further expansions are underway as well). It's a very fascinating place; somewhat depressing, considering just how bloody and brutal WWII was, but is definitely worth a visit. 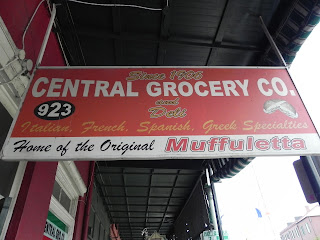 And of course, no trip to New Orleans would be complete without a muffaletta from Central Grocery in the French Quarter. For the record, Michelle said it was much better than she did the insects that she ate earlier.

As many times as I've traveled to New Orleans over the past couple of years, the trip we took a few weeks ago might be my last visit for awhile. The University of Houston is preparing to leave Conference USA, which means no more trips to see the Cougars play Tulane in the Superdome. And as of right now I'm still leaning against participating in Mardi Gras next spring.
Posted by Thomas at 5:15:00 PM No comments:

How hot was it today, really?

This afternoon, the temperature here in Houston topped out at 109 degrees Fahrenheit, according to the weather app on my iPhone. Although there's no question that today was a brutally hot day, that number seemed sort of peculiar to me: was it really that hot for a day in June? And if so, had it ever been 109 degrees in Houston in June before? Fortunately, Chronicle science blogger Eric Berger already had an answer:


Is it really that warm? For Houston, that would be remarkable. Fortunately my iPhone, and your iPhone, is wrong.

Fact is, through 1 p.m., today’s high temperature is 102 degrees as measured at the official Bush Intercontinental Airport station.

So why is the iPhone so much higher?

It’s a question Dwight Silverman and I dug into last August, and the answer is that the default iPhone weather data point for “Houston” is the Houston/Hermann Medical Center weather location. It’s the the helipad at Memorial-Hermann Hospital in the Texas Medical Center, some 200 feet above the ground.

Berger says that "it makes no sense" for a weather station to be located there, as the temperature reading would clearly be affected by heat being radiated from the surrounding pavement and buildings as well as, perhaps, the exhaust from the Life-Flight helicopters that land there. In that regard, the Memorial-Hermann helipad temperature reading is probably about as accurate as the temperature display in your car, which registers engine heat and re-radiated pavement heat as well as the actual air temperature.

Perhaps the person who decided to put Houston's default weather data point at that location wanted a location that was as close to the city center as possible. Who knows? At any rate, today's official high was 105 degrees today, as recorded at Bush Intercontinental Airport.

Of course, I could also ask if it makes sense for the city's "official" weather data point to be located at an airport twenty miles from the city's center.

I could also ask if the difference between 105° and 109° is really that meaningful. Today was miserably hot, regardless of the actual number.
Posted by Thomas at 10:54:00 PM No comments:

Turkish Airlines to begin nonstop flights to Istanbul next spring


The announcement comes three weeks after Council approved an expansion of Hobby Airport to accommodate plans by Southwest Airlines to start commercial international flights from that airport in 2015.

United Airlines had argued strenuously that the expansion would hurt the city’s economy by diverting international air traffic from Bush that all of the airlines depend on to support marginally profitable flights. In fact, the day Council approved Hobby expansion, United announced it would reduce its Houston-area staff by 1,300 employees and that it was canceling its planned service to Auckland, New Zealand.

Turkish Airlines, on the other hand, will start the new route with a Boeing 777-300ER, which seats up to 334 passengers.

It would appear that not even fellow Star Alliance member Turkish Airlines is buying United's gloom-and-doom predictions about Houston "losing its competitive edge" as an international air hub now that Southwest will be offering international flights out of Hobby. More likely, the Turkish flag carrier took note of the amount of economic activity that occurs between Houston and Istanbul (the two are sister cities) and decided that nonstop service between the pair made financial sense:


“The total Houston to Turkey trade value in 2011 was $3.6 billion,” said Celil Yaka, President of Texas Turkish American Chamber of Commerce. “We anticipate this trade will grow significantly thanks to this new flight.”

Service will begin on April 1, 2013 with four flights a week. I've always wanted to visit Istanbul, so perhaps this service will be of use to me someday.