The Cougars traveled to Annapolis and came back home with a solid win.

The Good: Clayton Tune passed for 261 yards and five touchdowns, with no interceptions. Two of those touchdown passes were caught by freshman wide receiver Sam Brown. Another freshman, running back Stacy Sneed, rushed for 100 yards. The Cougar defense intercepted Midshipmen QB Tui Lavatai twice and only allowed two Navy scores (one of which was a touchdown in garbage time). Defensive lineman Nelson Ceasar blocked a Navy field goal attempt.

The Bad: The Cougars fumbled the ball three times, one of which was scooped up by Navy for a defensive score.

The Encouraging: The Cougars committed only 4 penalties for 25 yards the entire game, and were not flagged at all in the first half.

What It Means: While 2-5 Navy is not going to be confused for a good team, this is nevertheless an important win for the Coogs - by far, their most complete game of the year - and a road win to boot. With this victory, the Cougars now have a 4-3 record.

Next up for the Coogs is a home date against South Florida.

SOFIA flies off into the sunset

Last month, a unique flying observatory made its final flight:

NASA’s one-of-a-kind 747 SOFIA flying telescope flew its final mission on Sep 28, wrapping up a career revealing mysteries of the universe that will keep astronomers busy for years to come.

SOFIA (Stratospheric Observatory for Infrared Astronomy) was a unique airborne observatory operated by NASA in partnership with the German Aerospace Center (DLR). It was a Boeing 747SP aircraft modified to carry an embedded telescope, and was able to fly into the stratosphere at altitudes of up to 45,000 feet. That put the flying observatory above 99 percent of Earth’s infrared-blocking atmosphere, allowing astronomers to study space in ways not possible with ground-based telescopes.

Engineers modified a Boeing 747SP to carry the DLR’s 38,000-pound, 100-inch reflective telescope. They also developed a “garage door” on the plane that rolled up to let the telescope work, as the plane flies above clouds and water vapor. SOFIA was also equipped with interchangeable instruments, to help the telescope make the right type of observations for a given mission.

It was one of the largest open ports ever flown on an aircraft, and the largest certified to fly at all altitudes and speeds with the door open. Pilots couldn’t even feel when the door was open. The stability of the telescope itself was equivalent to keeping a laser pointer steady on a penny from 10 miles away.

SOFIA was fully operational for 8 years, and logged 732 nights of observing. It helped astronomers worldwide study a wide range of cosmic events and objects invisible to other telescopes.

SOFIA was based out of Palmdale, California for most of the year, but would occasionally fly missions out of Christchurch, New Zealand to scan the skies over the southern hemisphere as well (here's a map of all 732 of its flights). The long-range, high-altitude 747SP, aircraft, previously in service with Pan Am and United, was ideally suited for this purpose.

NASA deemed the flying observatory as too expensive to operate past its 2021 fiscal year, which is why its mission ended at the end of September. It's a bit sad, but just another instance of the obsolescence of four-engined aircraft such as the 747SP.

NASA inventories the ways in which "SOFIA changed our understanding of the universe," including the detection of the first type of molecule to ever form in the universe and insights into star formation.   accomplished by SOFIA during its mission. Sumeet Kulkarni details some of the instruments used and discoveries made by by the flying telescope. Simple Flying hopes the aircraft will end up at a museum once it is fully decommissioned; the National Air and Space Museum's Udvar-Hazy complex at Dulles Airport outside of Washington, DC and Space Center Houston are possibilities.

I still don't believe what I saw last Friday night.

After playing three quarters of mistake-ridden, uninspired football, the Houston Cougars rallied from a 19-point deficit in the fourth quarter to snatch victory from the jaws of defeat against the Memphis Tigers at Liberty Bowl Stadium.

The Good: After Memphis kicked a field goal to take a 29-13 lead with eight minutes in the game, the Cougars went on a 20-3 run sparked by a Jayce Rogers 100-yard kickoff return. The Cougars scored a touchdown on their next possession thanks in part to QB Clayton Tune converting two fourth-and-longs, one of which was a sack-evading scramble on 4th and 11 that Ryan calls Ryan calls "the play of the year." The Coogs also got lucky when a Tiger defender dropped a sure interception off a tipped pass.

Then the Cougars recovered the onside kick attempt. Then they scored once more to take the lead with 18 seconds left. Then they sacked Memphis QB Seth Henigan at midfield as time expired to seal the win... You just have to see it to believe it:

The Bad: The entire game up until the fourth-quarter rally had been crap. The UH offense sputtered, managing only seven points through three quarters. Through three quarters Tune had 220 passing yards but only one touchdown to show for it, and he also threw an interception. The Houston defense allowed Henigan to rack up 241 passing yards, a touchdown and no interceptions; the Tigers gained another 156 yards and a score on the ground. The Cougars committed seven penalties for 75 yards - better than previous games, but still bad.

The Ugly: The Cougars left lots of points on the field before their rally. Bubba Baxa missed a chip-shot field goal at the end of the first half (by the end of the game he would be replaced by Kyle Ramsey), and the Cougars failed to score from the Memphis 1 yard line early in the second half. They also failed to convert two two-point conversion attempts.

Make some of those scores, and maybe this rally wouldn't have been quite as necessary.

What It Means: Add this game to the list of miracle comebacks the Cougars have accomplished in recent program history (Ryan inventories them, including the miracle comeback against Pitt in the 2014 Armed Forces Bowl). In addition to being exciting for the fans, it's a much-needed confidence boost for the players. And the fact that it occurred against a nemesis like Memphis makes it all the better.

But it also masks some continuing problems for the team, including slow starts by the offense and lapses by the defense.

The Coogs are now 3-3 heading into a much-needed week off. They're just a couple of plays away from being 5-1.

They're also just a couple of plays from being 0-6.

Another late-game collapse by the UH defense. Another overtime. Another loss.

The Good: In the fourth quarter and trailing by seven points, the Cougars put together back-to-back touchdown drives that were as clean and as creative as anything the UH offense has managed all season. QB Clayton Tune was 6 for 7 on these two drives for 96 yards and a touchdown (to Nathaniel Dell), while RB Brandon Campbell, who was held out of last week's game, added eight carries for 24 yards and a touchdown. In between the two scoring drives, the UH defense held Tulane to a three-and-out. Did I mention that there were no penalties?

These two fourth-quarter drives gave the Cougars the lead and showed what the UH offense is capable of accomplishing if they played balanced, mistake-free football. Alas, so much of the team's offensive production this season has been anything but mistake-free.

The Bad: Tulane QB Kai Horton was the team's third-string quarterback, but you wouldn't know it by the way he played. Nowhere was this more evident on Tulane's last drive of regulation. Down seven and with 3:40 on the clock, Horton methodically marched the Green Wave 75 yards down the field in two minutes and 25 seconds to tie the game. Horton's shovel pass to Tyrick James on fourth-and-goal made the entire Houston defense, including DC Doug Belk, look utterly stupid. Horton ended the game with 132 yards, three touchdowns and no interceptions.

"Ugly" is the only way to describe the state of Houston Cougar football right now.

What It Means: The Coogs came into their three-game home stand hoping to heal what ailed them; instead, they dropped two out of three and currently possess a 2-3 record. Right now I'm struggling to see where any remaining wins will come from.

Given next season's conference move, this will also likely be the last time Houston plays Tulane for awhile. The Coogs now have an 19-8 all-time record against the Green Wave; Ryan takes stock of a rivalry coming to an end.

Houston has another Friday night game next week, this time at Memphis.

Chris Baldwin laments the lack of the creative offense that was supposed to be Dana Hologrsen's hallmark. Andy Yanez takes stock of another overtime loss. Ryan plainly notes that the Cougars just aren't a good team right now.

A couple of Fridays ago, Corinne and I went to see Billy Joel play at Minute Maid Park. Seeing the legendary New York singer-songwriter in person was something of a bucket list item for both of us. It was our first time seeing a concert at the baseball stadium as well. 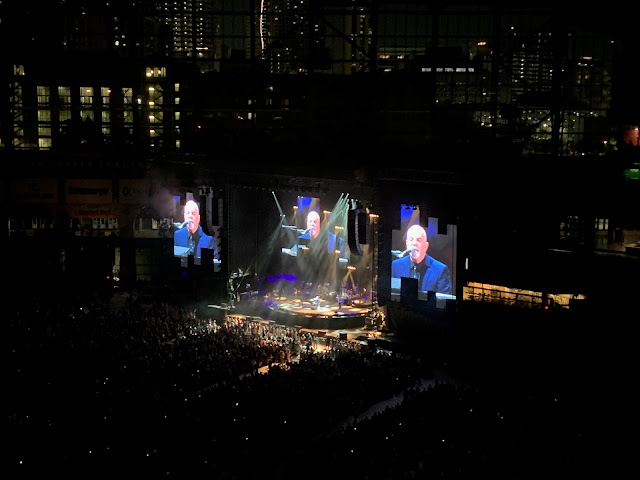 Billy Joel obviously has a considerable repertoire, and he managed to fit his biggest hits into the two-hour-long concert, including "Just The Way You Are," "The Longest Time," "My Life," "You May Be Right," "Uptown Girl," "It's Still Rock and Roll To Me," and, of course, "Piano Man."  Several songs of his that I'm less familiar with, such as "The Entertainer," "Pressure," "Allentown" and the epic "Scenes From an Italian Restaurant" also made the setlist.

I was hoping to hear "I Go To Extremes" while Corinne was looking forward to hearing "The Downeaster Alexa." Neither song made the setlist, unfortunately; in fact, the only track off Storm Front was his Boomer history lesson that everyone claims to hate but can still sing along to, "We Didn't Start The Fire." (Joel needs to release an updated version of that song that captures all the crazy shit that's happened over the past eight years or so, and title it "This Is A Dumpster Fire.") 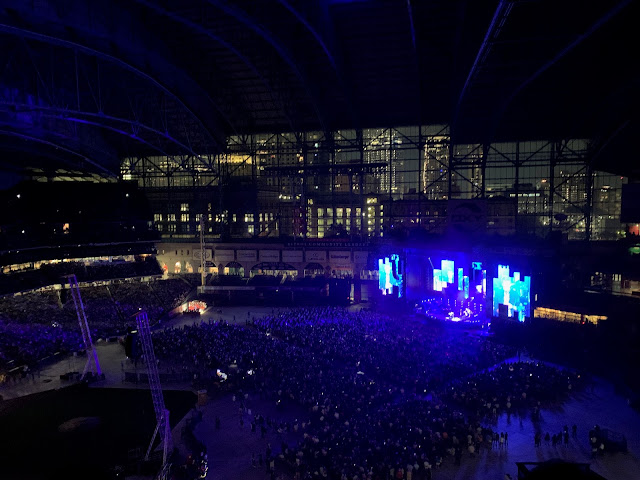 In addition to his own music, Joel sprinkled his performance with covers from The Rolling Stones, Bruce Springsteen (who, like Joel, was born in 1949), and ZZ Top. His guitarist, who has some considerable vocal talent of his own, treated the audience to a rendition of the Italian aria "Nessun Dorma," and Joel's percussionist (who also had impressive vocal skills) spliced "Dancing in the Street" into the middle of "River of Dreams."Allowing members of his band to take over a couple of songs gave Joel a chance to rest his vocal cords, although he continued playing the piano the entire time. All in all, pretty good enegy for a 73-year-old man. 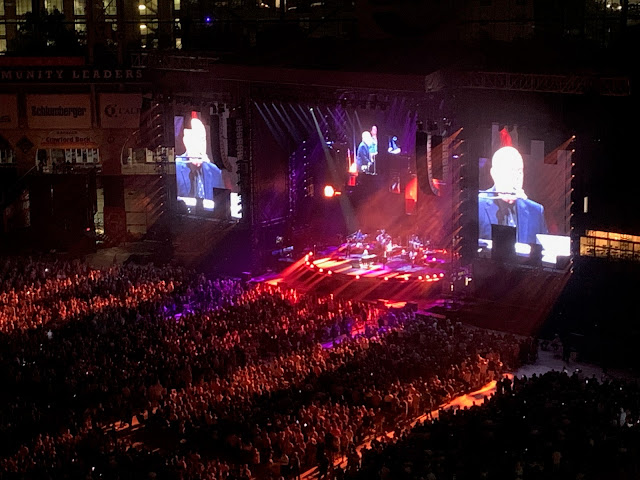 It's worth remembering that Joel has not put out a new album since 1993 - almost 30 years. Yet he's still such a legend that he can fill a 40-thousand seat baseball stadium with his fans.

That said, I'm not sure Minute Maid Park is going to become a preferred concert venue for me. The acoustics were fine, but a venue that large means that you don't have a great view of the person performing unless you want to pay the big bucks for the field seats. Billy Joel's stage was set up in deep center field, while most of the audience sat in the stadium's seating area. The distance was considerable; being in the 400 level on the first base side, Joel was little more than a dot to our eyes. The big screens were partially obscured by speakers and other equipment as well. I wish I hadn't forgotten my binoculars.

However, the bottom line is that my wife and I finally got to see Billy Joel live, and had a great time.

The concert setlist is here, while the Houston Press's concert review is here.