At halftime of today's game, when the Texans were up 20-7 on the undefeated Indianapolis Colts, my thought wasn't "oh, wow, the Texans have a chance for a huge upset!" but rather "hmmm, I wonder how the Texans are going to blow this one?"

(For the record, the Texans blew it by scoring only seven points the entire second half, while allowing the Colts to score 28 points, seven of which came on an interception returned for a touchdown.)
Posted by Thomas at 10:24:00 PM No comments:

Cool map of the day

Via GOOD, a really neat map of the Interstate Highway System drawn in the style of a map of the London Underground: 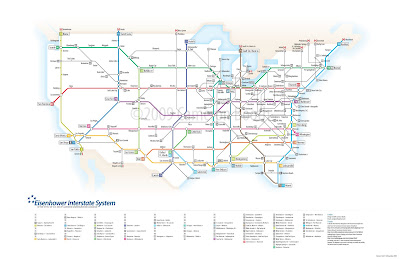 Not to gloat or anything, but...

...it's kind of cool to see this kind of development planned for a rail station that I helped locate.

This particular corner of Lewisville, close to the intersection of I-35E and the 121 Bypass and right across the Interstate from Vista Ridge Mall, has already seen significant retail, office park and multifamily development. So the kind of density, land use and amenity mix being planned makes sense for this area. My only question is how they'll deal with the floodplain issues.

That's all it took for the University of Houston offense to score the game-winning touchdown against Southern Mississippi last Saturday.

In shouldn't have come down to that, of course. The Cougars were leading by a comfortable eighteen points early in the fourth quarter, but then the defense became complacent and that, along with an inopportune Cougar fumble, allowed the Golden Eagles to mount a furious fourth-quarter. USM tied the game with 57 seconds remaining and everybody in the stadium thought that overtime was in the works.

Everybody, that is, except for Case Keenum and the rest of the Cougar offense. With all three time outs at their disposal, The Cougars marched right back down the field to score with 21 seconds remaining. Southern Miss then got the ball back and attempted to tie it up, but USM QB Martevious Young's hail mary pass into the endzone was batted away and the Cougars held on to win, 50-43.

Keenum was his usual impressive self, completing 44 of 54 passes for 559 yards and five touchdowns. He was also intercepted once and sacked once, but still performed well enough to earn a helmet sticker from Lou Holtz on ESPN's College Football Final. The Cougars also gained another 191 yards on the ground for a whopping 750 yards of total offense. But the real story of the game came from the Cougar special teams, which blocked one USM field goal and two USM extra points, running one of them back for a two point conversion of its own. That equated to seven points that turned out to be the difference in the game.

With the good came the bad, however. Houston's defense played reasonably well for three quarters but was completely dominated in the fourth, allowing three Southern Miss touchdowns. In all, the Golden Eagles gained 608 yards of total offense and suffered no turnovers. Houston running back Bryce Beall, on the other hand, fumbled the ball three times. Needless to say, the coaches will be spending a lot of time working with him on his ball handling skills this week.

The important thing, however, is that the Coogs came away with the W. As a result of the win, the Cougars move up from #17 to #13 in the AP poll. They're now 15th in the Coaches poll and 15th in the BCS standing as well. In order to crash the BCS party, they need to be at least 12th. With non-automatic-qualifiers TCU and Boise State already in the top ten, however, I don't think the Cougars are going to be busting the BCS this year. That loss to UTEP really hurts in that regard. However, UTEP's loss to UAB last Saturday also means that the Cougars are once again in control of their own destiny regarding the division championship.

Which is significant in that the road doesn't get any easier from here. The Cougars now travel to Tulsa to play their second game of the "Golden Trifecta" against the Golden Hurricane. Needless to say, Tulsa has revenge on their minds after their 70-30 beating at the hands of Houston last season. The Coogs are in for another struggle, and the young defense must improve.

Given the history of the two schools, it should be no surprise that Saturday's game was as hard-fought as it was. Since the two teams joined Conference USA in 1996, USM has traditionally been Houston's nemesis. The games are oftentimes close - past scores inclide 56-49, 15-21, 29-35, 27-31 and even 3-6 - and the Golden Eagles command a 7-3 lead over the Coogs in the series.
Posted by Thomas at 10:02:00 PM No comments:

New stadium for North Texas; could one be on the way for Houston?

The University of North Texas announced last Thursday that the Texas Higher Education Coordinating Board had approved their request to build a new football stadium in Denton. Groundbreaking is to occur later this month, with construction scheduled to be completed in time for the 2011 season. The new stadium will be located on the other side of Interstate 35E from Fouts Field and will seat about 30,000.

This is a great step forward for the struggling Mean Green football program. 57-year-old Fouts Field was old and lacking in amenities and its sightlines weren't great. Denton ISD's new stadium on the north side of Loop 288 put it to shame, and it's hard to recruit high school students that are used to better facilities than the ones your school is offering.

The University of Houston is in the same boat. As much as I love Robertson Stadium, the fact is that it is even older than Fouts Field - it was built in 1940 - and is simply substandard in terms of amenities such as locker rooms, press boxes, restrooms, concession areas, luxury suites and the like. It really needs to be upgraded, or even replaced. To that end, the University has just put out a Request for Qualifications (see .pdf here) for a feasibility study to renovate or even replace Robertson Stadium. Several options are going to be considered, including the possible construction of a new stadium on the intermural fields at the corner of Cullen and I-45 (a prospect that is appealing to me) or on the other side of Brays Bayou from campus in MacGregor Park. Any new stadium would have to have a capacity of 40,000 fans, up from Robertson's current capacity of about 32,000.

The RFQ comes as no surprise, as new Athletics Director Mack Rhoades has experience building new stadia from his time at Akron and was brought to Houston precisely for this reason. What is a bit of a surprise is the speed at which the University of Houston wants the study completed; the RFQ closes on November 23rd and the study could begin as soon as early January 2010. Clearly, the University of Houston administration wants to move forward with these facilities upgrades as soon as possible.
Posted by Thomas at 7:33:00 PM 1 comment: