If you didn't know any better, you'd think I was just at a high school reunion or something...

Speaking of which, of the 165 friends I currently have on Facebook, I have the following count:
Does anybody else out there have a similar disparity? If so, what does it say about the interpersonal bonds we make in high school relative to the bonds we make in college?
Posted by Thomas at 11:04:00 PM No comments:

And more speed limits get raised

Last week, in my post about the State Legislature's proposal to raise speed limits to 85 mph on certain West Texas Interstates, I noted that I hadn't heard of any proposals to raise the statewide nighttime speed limit of 65 mph. It took only a few days for the Lege to make a liar out of me:

Legislation that would eliminate lower nighttime speed limits in Texas, allow trucks to drive at the same speed as cars on all highways and authorize rural highway limits of 75 mph statewide was given initial approval by the Texas House on Friday. The so-called debate — no House member had questions or comments for the bill sponsor — lasted about three minutes, and House Bill 1353 passed on a voice vote without opposition.

The legislation by state Rep. Gary Elkins, R-Houston, will need one more House vote before moving to the Senate, where Elkins said that Transportation Committee chairman Sen. Tommy Williams, R-The Woodlands, has agreed to carry the bill.

The legislation would abolish the 5 mph differential between day and night limits on many Texas highways. And in the 150 or so Texas counties, most of them in the eastern half of the state, where the maximum speed limit on rural highways is now 70 mph, the Texas Department of Transportation would be allowed to up it to 75 mph, following traffic and engineering studies.

My thoughts about this change are the same as for the West Texas change: by raising maximum posted speeds by a mere five miles per hour, you're only shaving a handful of minutes off those hours-long drives between Houston and Dallas or San Antonio. However, raising the maximum speed limit to 75 does bring Texas in line with several other central and western states, including Kansas, Oklahoma, New Mexico and Colorado.

And I'm not going to shed any tears over the death of the lower nighttime limit. In my experience they are almost universally ignored by motorists, and the fact that Texas has nighttime limits at all made it an outlier in relation to the rest of the nation.

As the article states, traffic and engineering studies of candidate highways will need to be undertaken before any limits are raised, so we probably won't see any 75 mph signs along I-45 until the summer of 2012. Kuff has more.
Posted by Thomas at 10:37:00 PM No comments:

The perfect coffee mug for that boring, pointless meeting

I want one. Whether I can bring it to a meeting without getting fired is, of course, a different story...
Posted by Thomas at 11:05:00 PM No comments:

Last week, we learned that the Texas State Legislature is considering a bill that would raise the maximum speed limit on certain rural highways (generally in the western part of the state) from 80 to 85 mph.

This doesn't really make much sense to me. For starters, it seems kind of strange that something that reduces a vehicle's fuel economy is being suggested even as gasoline prices are continuing to rise.

But more importantly: raising the speed limit by five miles per hour on these highways doesn't really do much in terms of time savings, which is apparently the reason for this proposed change. This is because of diminishing returns: the faster you go, the smaller the difference, in terms of time savings, a relatively small 5 mph adjustment in the speed limit is going to make.

Currently, I-10 in West Texas has an 80 mph speed limit on a 432-mile stretch between milepost 62 (near the El Paso/Hudspeth County line) and milepost 494 (outside of Kerrville). If a motorist has the fuel capacity and the fatigue tolerance to drive this entire stretch without stopping, the trip currently takes them 5 hours and 24 minutes (432 miles / 80 mph = 5.4 hours) at the posted speed limit. Assuming this same stretch of roadway is upgraded to 85 mph in its entirely, the trip would be shortened to 5 hours and 5 minutes (432/85 = 5.08) - a time savings of only 19 minutes.

Of course, as we all know, motorists generally don't observe posted speed limits; rather, they drive five to ten miles per hour above them. So, a motorist traveling the entire distance between the El Paso County line and Kerrville at ten miles above the limit (90 mph) makes this trip in 4 hours and 48 minutes (432/90 = 4.8); if the speed limit is raised to 85 mph and they feel comfortable traveling (and manage to avoid being pulled over) at 95 mph, they can shorten their trip to 4 hours and 33 minutes (432/95 = 4.55). In other words, they save a whopping 15 minutes on this stretch of road.

And this only applies to daytime driving. Texas has a statewide nighttime speed limit of 65 mph, and I haven't heard anybody suggest that this limit be raised.

Given the relatively small time savings created by increasing the speed limit from 80 to 85, the next question in my mind is: why not go even higher? Why not a maximum speed limit of 90 or even 100 mph on these stretches of highway? Heck, why not eliminate speed limits entirely? If it works for Germany, why can't it work for Texas? (I say this, incidentally, as somebody who has traveled on the A6 in Bavaria at speeds approaching 120 mph. That was fun.)

Issues of fuel economy and driver safety (as we all learned in driver's ed, at speeds like these you're not "driving" a car so much as you are "aiming" it) aside, there are some big differences between Interstates and Autobahns. For one thing, Autobahns have different design standards than Interstates. More importantly, requirements for driving on the Autobahn (e.g. slower traffic always stays to the left and passing on the right is forbidden) are not as well-observed or as aggressively enforced in Texas as they are in Germany.

Besides, much of the Autobahn network does have maximum speed limits, and even on the stretches that don't there is a "recommended" maximum speed limit of 130 km/h. Which, incidentally, is just about the same speed as the current 80 mph limit on West Texas Interstates.

If this bill passes, engineering studies of the stretches of highway that are eligible for this change will be undertaken. The earliest these new limits would take effect is summer 2012.

Kirby works out with the Cougars

After Saturday's annual Red and White Spring Game, the University of Houston football team invited children down on the field to participate in the 2011 Youth Experience. Kids spent time working out with the players, position-by-position. Kirby participated in these activities. 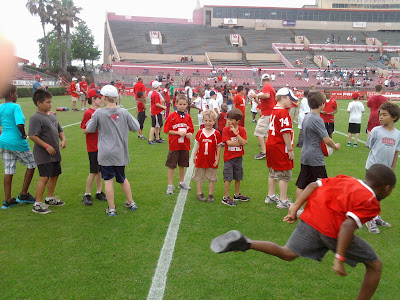 The event was well-attended; an estimated 150 kids of grade-school age participated. 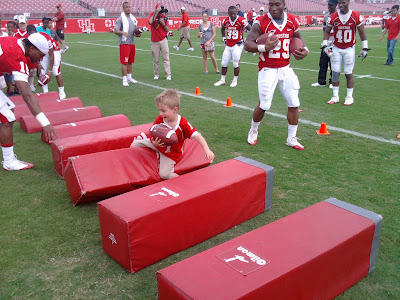 Running back Michael Hayes (#29) offers encouragement as Kirby negotiates the obstacle course set up at the running back station. The children were divided into groups and spent about five minutes or so rotating between each position's station. 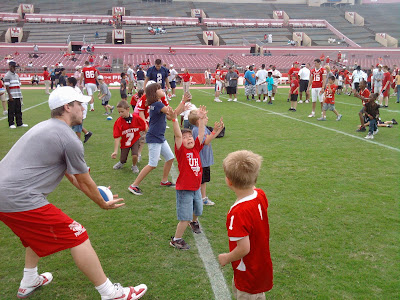 Kirby watches as QB Case Keenum (#7) demonstrates how to catch a ball at the quarterbacks station. Kirby, however, was more interested in hiking the ball, rather than throwing it. Maybe he wants to grow up to play center!

I really appreciate that, even though they must have been exhausted after the spring scrimmage ended, all the players and coaches took the time to interact with their youngest fans. Kirby enjoyed it and will likely participate again next year.

As for the spring game itself: it's really hard to get a feeling for what to expect this fall, especially since it was first-team offense against second-team defense and vice versa, and also because so many key players were held out or otherwise saw little playing time in the scrimmage. The running backs and receivers look good, and I was happy to see the defensive line put more pressure on the quarterbacks and bat down several passes. The secondary also looked improved, but I still have concerns about the run defense. And all I can say about the quarterbacks position is that I hope Case Keenum gets healthy this summer and stays healthy this fall.

There's still a lot of time between now and the start of the season, however, so what we saw on the field last Saturday is probably not going to be what the UH faithful see in the fall.
Posted by Thomas at 9:06:00 PM No comments:

In case you haven't already seen it, a compelling compilation of classic video-game deaths, made even cooler by an eight-bit version of Tears for Fears' Mad World:

I even see a couple of my old Sega Master System faves, Space Harrier and Hang On!, included.

Reminders that I'm getting old

Rendez-Vous Houston happened 25 years ago today. I remember sitting out with my family on Allen Parkway with hundreds of thousands of other people to watch the spectacular laser and fireworks show. Although I've seen many rather impressive pyrotechnics displays since then, I can honestly say that I've never seen anything quite like Jean-Michel Jarre's concert and light show in terms of its complexity, its duration and its downright awesomeness. J. R. Gonzales has more retrospective.

But twenty-five years ago? Wow.

Oh, and my twenty-year high school reunion? It's a week from this Saturday.
Posted by Thomas at 9:40:00 PM No comments:

The azalea is a common landscaping plant in Houston as it is in many other parts of the southeastern United States, and during the spring the city is awash in its blooms. A couple of weeks ago I walked around my neighborhood to take some pictures of these plants in full bloom: 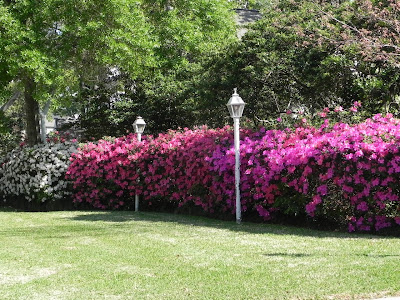 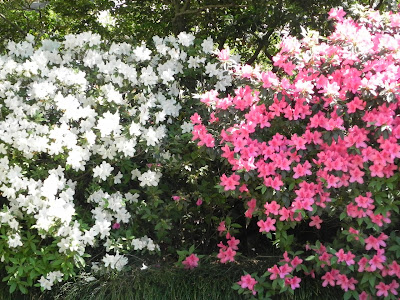 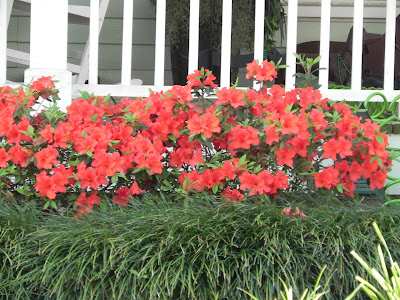 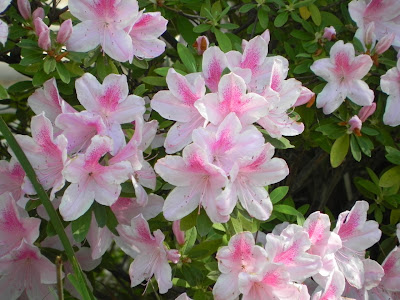 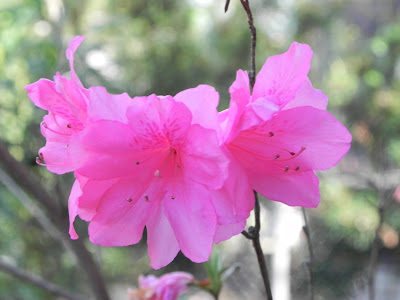