As I noted in the previous post, my original plan after participating in Mardi Gras in New Orleans was to fly directly to Dubai to assist in some business development work being undertaken by my company's office there. However, after the Dubai office suddenly canceled my trip, I found myself needing to find my own way back to Houston. Should I fly Southwest (which is how I got to New Orleans), take a bus, rent a car, or take the train?

Given that it was the cheapest means of getting home ($49 for a ticket to Houston), the New Orleans Union Passenger Terminal was close to my hotel, and I wanted to try something different (I hadn't ridden on an inter-city Amtrak train since I was a young child), I decided to ride the Amtrak Sunset Limited back home. So I purchased a ticket online, took short taxi ride to the UPT and waited for the train's 11:55 am departure.

The entire train-riding process, from standing in the ticket line to check in, to standing in the boarding line to get one's seat assignment, to the trip itself, is glacially slow. The scheduled trip from New Orleans to Houston on Amtrak is about nine hours and twenty minutes long, compared to only about six hours by car or one hour, gate-to-gate, by plane. It's not a mode of travel that's going to appeal to anybody who's in a hurry.

There were, however, advantages to traveling by train. There was no security checkpoint where people were required to wait in line, take their shoes off, take their laptop out of their case, walk through an x-ray scanner that allows TSA agents to see people naked, etc. On the train itself, there were no pre-trip safety demonstrations, no seat belts that had to be worn, no restrictions on when people could get up and move around the train. The seats were large with plenty of legroom and they reclined much further than any seat available on a plane (outside of, perhaps, first class). The tray tables were large enough to comfortably fit a regular-sized laptop and electric outlets for charging phones and laptops were available (no in-train WiFi yet, although other Amtrak trains are beginning to offer this service).

The Sunset Limited features a lounge car where drinks and snacks are available, as well as a full-service dining car, where I ate lunch. The service was excellent, the food was decent and the prices were reasonable.

The scenery was nice, but not spectacular: industrial plants and massive railyards in urban areas, rice and sugarcane fields through most of Louisiana and cypress swamps along the Sabine Rver that separates Texas from Louisiana. The most compelling view came shortly after the train departed New Orleans, as it crossed high above the Mississippi River on the Huey P. Long Bridge west of town. From this vantage point 135 feet above the river much of the New Orleans metropolitan area, as well as the maritime goings-on the river itself, could be viewed.

The train traveled at various speeds throughout the journey, stopping a few times to let freight traffic clear. On one stretch of BNSF trackage between Lafayette and Lake Charles the train slowed to a crawl - perhaps ten or fifteen miles per hour, and when the train arrived in Lake Charles well behind schedule. I began to worry that the train wouldn't make it into Houston until well past its scheduled arrival time. But when the train transitioned from BNSF trackage to UP trackage in Lake Charles, it began traveling significantly faster; between Lake Charles and the outskirts of Houston the Sunset Limited was traveling at its top speed of 79 mph for most of its route. The lost time was more than made up and the train arrived in Houston at about 8:30 pm - well ahead of its scheduled arrival time of 9:13. Since the Sunset Limited is at the mercy of the freight operations of the BNSF and UP tracks along which it runs, it's obvious that a significant amount of padding its built into its timetable.

The coach cars where I sat were about half-full (I can't speak to the capacity of the sleeper cars), and the passengers were a mix of sightseers, vacationers and lower-income people who perhaps chose to ride the train rather than take a bus between New Orleans and Houston because of the comfort the train afforded relative to a bus (and it's worth noting that, due to traffic conditions and the number of stops they make, a Greyhound bus ride between New Orleans and Houston takes anywhere from seven to nine hours - not a significant time savings advantage, especially since bus and train fares were about the same).

In the dining car I met a gentleman from Portland, Oregon who had also come to New Orleans for Mardi Gras and was heading back home. He was taking the Sunset Limited all the way to its final terminus in Los Angeles, where he would then board the Coast Starlight to Portland. He apparently took the train whenever he traveled (was he afraid of flying? I didn't ask) and his trip home would take approximately four days. I'm guessing he was self-employed or independently wealthy or something, because I don't see how people with regular jobs would be able to have that much free time to spend on the journey itself.

The Amtrak station in Houston is located on Washington Avenue, just on the other side of I-45 from downtown. It is not well-served by public transportation (the nearest bus stop was several hundred feet away and, although the train passes directly underneath the UH-Downtown METRORail station, there is no way to get there from the Amtrak station) but there was a taxi queue. Most passengers getting off at Houston had friends or relatives come pick them up (Lori and Kirby came to get me).

The massive government subsidies that Amtrak requires in order to operate aside, I found it to be a viable form of inter-city transportation. That being said, I can completely understand why more people don't ride the Sunset Limited: the infrequent services (it only makes three trips a week per direction), the slow pace of the trip, and its unreliable adherence to its timetable (although there's something to be said for getting to Houston ahead of schedule!) make it unattractive to business travelers or people who are otherwise in a hurry. Such is the nature of a passenger rail service that operates on tracks intended primarily for freight usage. For that reason, I'll probably be sticking to Southwest for most of my trips to New Orleans.

However, I did find the trip to be relaxing and enjoyable, and I'm glad I decided to ride the train in this particular instance. If conditions permit, I might just ride the Sunset Limited again someday.
Posted by Thomas at 10:12:00 PM No comments: 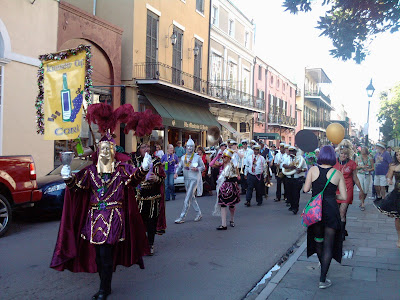 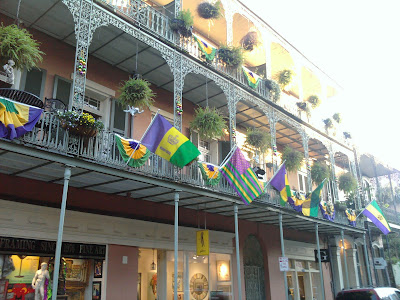 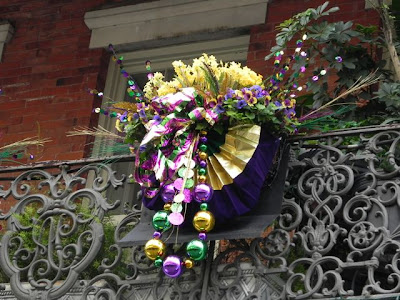 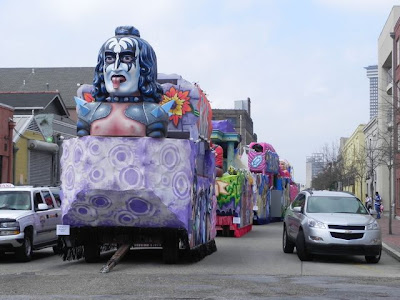 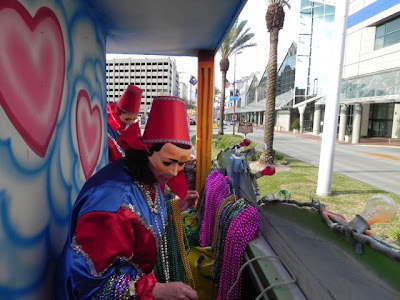 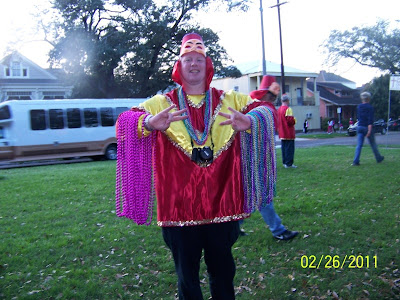 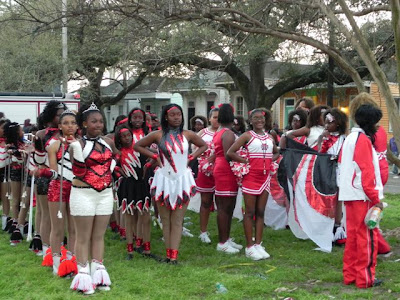 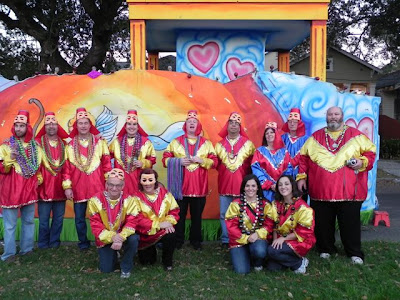 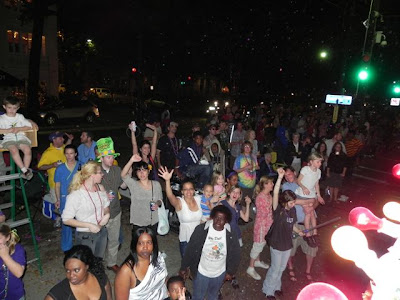 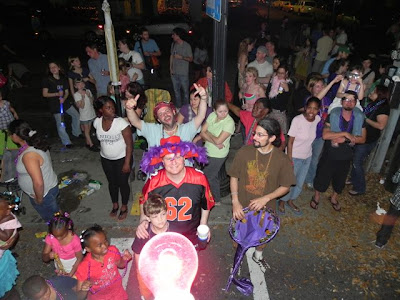 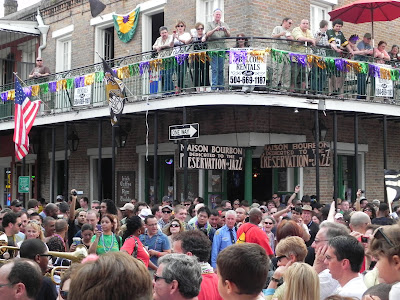 All in all, it was a fun experience and I appreciate the opportunity to have participated. Dave sent us our applications for the 2012 parade last week. I am definitely going to do this again next year.
Posted by Thomas at 7:58:00 PM No comments:

Requiem for a bracket

So I had Ohio State, Duke, Florida and Kansas in the Final Four.

Needless to say, I am hating college basketball right now.
Posted by Thomas at 8:37:00 PM No comments:

The Lady Cougars are going dancing

While the rebuilding men's program had a season to forget, the UH women's basketball team had a surprisingly good year, winning the C-USA regular season title en route to a perfect 16-0 conference record and a 26-5 overall record. As a result, they've punched their ticket to the NCAA womens' basketball tournament.

The Lady Coogs, who enter the tournament as an 8 seed, will face 9 seed West Virginia in the first round this Sunday in Waco.

Congratulations to the Lady Cougars and first-year head coach Todd Buchanan. Good luck and Eat 'Em Up!
Posted by Thomas at 11:44:00 PM No comments:

The 2011 model humans have arrived!

I know I'm rather late to the party, but I'd nevertheless like to offer a belated congratulations to my cousin Liz and cousin-in-law J.E. on the arrival of their two twins, Iris and Theo, last week.

Twice the diapers, twice the fun! Or maybe not. But welcome to the world regardless...
Posted by Thomas at 11:18:00 PM No comments:

Received the "we think we have our staffing needs worked out, so we don't need you to come over here after all" e-mail from the Dubai office on Sunday morning.

That's right. The day before I was supposed to leave.