It started out nicely enough...

When the winter blast made its way into Houston two Sundays ago, it started out nicely enough. Work for both Corinne and myself had been canceled for the following Monday, so we could stay up as late as we wanted. We stood out on our balcony, sipped drinks, and watched as the sleet began falling that evening. We were hoping that actual snowflakes would begin appearing at some point.

There was one brief power outage in the wee hours of Monday morning, but it didn't last too long and I thought it was simply a routine rolling blackout that we had been warned to expect.

At about 4:30 am, I put on my coat and went down to the front of our apartment complex for a ground-level view of the winter weather. The gentle fall of freezing precipitation (still mostly sleet, but some small snowflakes mixed in) was beginning to accumulate on the lawns and sidewalks, and the icy mixture on the ground made an enjoyable soft crunching sound as I walked on it. The fountain in front of the complex was beginning to develop a layer of ice. It was cold and quiet and I was the only one around. 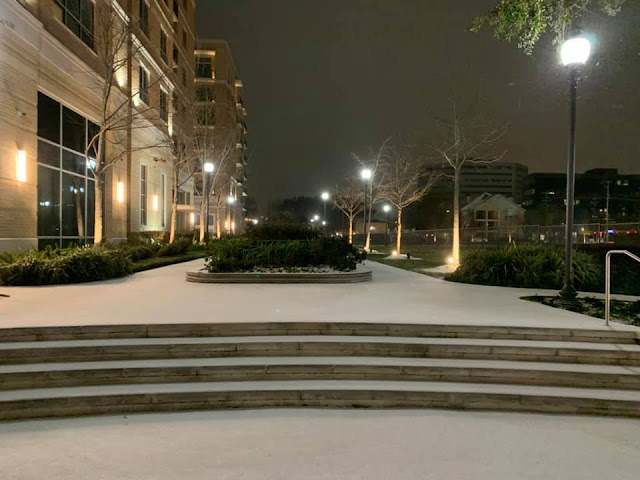 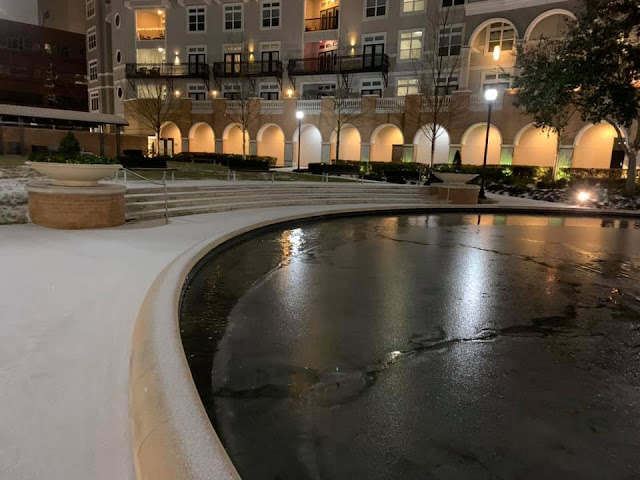 About an hour later, the power went off again. It wouldn't come back on again for 24 hours. It was hard for me to fall asleep, as I am so accustomed to a fan (or some sort of other white noise) running while I sleep that the total silence actually kept me awake. But at some point I dozed off for a few hours.

I awoke as the wintry precipitation began to move out of Houston, and found our interior courtyard in a blanket of snow and ice. It was pretty and tranquil. 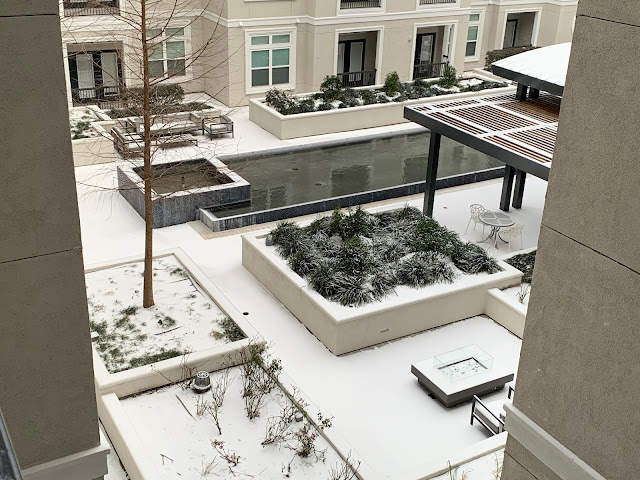 Corinne and I later took a walk around our neighborhood to see everything covered in winter.  People made snowmen and had snowball fights. We had to walk carefully on the sidewalks as the ice was very slippery.

The lack of electricity, however, was an inconvenience, especially as the outage dragged on. We were limited in what we could eat due to the fact that we couldn't cook anything. We were limited in the amount of information we could get about the storm because the lack of operating cell towers made upload speeds to our phones (whose battery reserves steadily continued to dwindle) slow. We wanted to drive somewhere that was open to maybe get a warm meal and recharge our phones, but we didn't want to risk driving on icy roads (and few places were open anyway). So we sat in the dark and ate sandwiches and played Uno by lantern light.

Monday evening we began to worry the food would spoil if it stayed in the refrigerator, so we began moving perishables out to the balcony so they would stay cold.

Our apartment, being a unit facing the interior courtyard on the fourth floor of a concrete structure, generally traps heat fairly well; we rarely, if ever, have to run the heater. However, after a day without power even it was beginning to get cold.

The power did flicker on again shortly after midnight on Tuesday. After a few minutes, however, it went out again. It returned again around 5 am, and stayed on for most of the day. This was a relief, as it allowed us to recharge our devices, watch the news and cook ourselves dinner. I got another text from work saying that things would be closed again on Tuesday; the power outages had shut down our network so nobody could remotely log in.

Tuesday evening the electricity went out once again, which meant another evening of sitting in the cold and dark. Happy Fat Tuesday!

Wednesday, the electricity was intermittently on and off all day long. Work was canceled for a third straight day. We also had to deal with another problem: low water pressure (because the city's pumps had no electricity), and a "boil water" notice for the little water we could get (because the city was concerned about bacteria in the water supply owing to the low pressure).

My parents came over Wednesday afternoon and stayed the night with us. They had gone without power for almost two days straight, had nearly frozen to death while trying to sleep the night before, and had no water pressure at all. Even if our electricity continued to cut in and out, they'd still be warmer here than there.

Our complex's management told us to go down to the fountains and fill buckets of water if we needed to flush toilets. So Wednesday evening I made several trips between our unit and the fountain in the courtyard, hauling buckets of water up flights of stairs because I didn't want to risk using the elevator in case the power went out. I was given a taste of what it was like to be a medieval villager getting water from the town well. I was also reminded that I am horribly out of shape.

Our last power outage was Wednesday evening, and it was brief. The following morning, I discovered that my work's network was restored so I was able to log on, check my emails and complete some tasks. (Unfortunately, a lot of my coworkers were still unable to work because they didn't have reliable electricity, were dealing with burst water pipes, or had some other weather-related emergency to attend to.)

Later that morning, the water pressure returned. Then, a neighbor of my parents informed them that their power had returned, so they could go back home.

However, just as we thought things were returning to normal, Corinne got a call from her mother. She had been staying at a friend's house, and had come back home to discover that a pipe had burst in one of her bedroom closets and had completely flooded her house. Corinne's mom is currently staying in a hotel; her house is going to need extensive remediation and some of her personal belongings may be lost forever.

Yes, this arctic blast was a freak, rare weather event. But this was also an embarrassing and unacceptable systemwide failure of the state's power grid (and no, wind turbines do not deserve all the blame, no matter what the idiots running this state might think). It caused a lot of trouble for a lot of people, and was close to being much, much worse than it was.

The State of Texas must do better. These arctic weather events might be rare, but they do happen. There's no excuse for not having our electrical grid prepared for when they do come.