The weather was wonderful, our morning tailgate was successful, the Cougars managed a thrilling 50-43 victory over Southern Miss, we had a good neighborhood Halloween Party and Kirby did pretty well with his trick-or-treating candy haul. All in all, a pretty good Halloween. Here are some pictures.

Kirby the Dinosaur bears his teeth and tries to look scary: 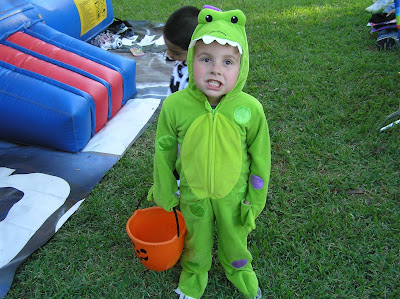 The neighborhood Halloween party featured an inflatable moonwalk for the kids to jump around in. The festivities were briefly marred, however, when a mischevious Kirby ran back behind the castle and unplugged its air blower, causing it to deflate. Fortunately, nobody was hurt and the moonwalk was quickly reinflated. 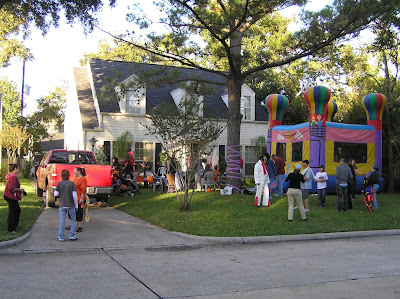 Lori the Witch was on hand to keep Kirby from disrupting the party any further: 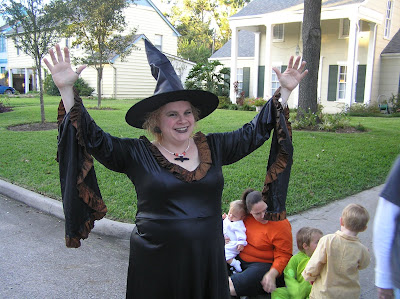 My costume was that of a happy, if not sunburnt, University of Houston fan. The noon start time was good in that it meant that the game did not conflict with trick-or-treating activities, but Houstonians simply aren't used to games so early and attendance suffered as a result: 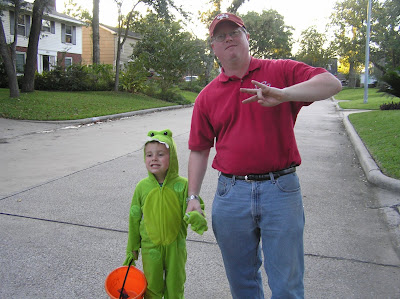 Too much bubble bath soap?

I probably need to watch Kirby a little more closely when he's pouring bubble bath soap into my parents' bathtub. I think he used a bit too much the other evening: 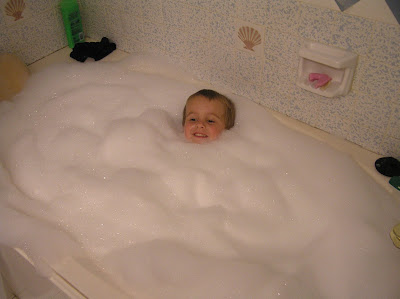 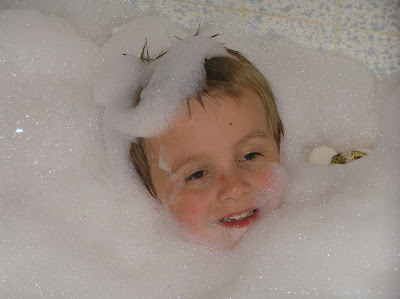 Oh, well. At least he had a good time and was completely clean by the time he got out.
Posted by Thomas at 11:49:00 PM No comments:

Papilio cresphontes is larger and has a somewhat different yellow-and-black pattern than its cousin Papilio polyxenes. It is, in fact, the largest butterfly native to the United States. 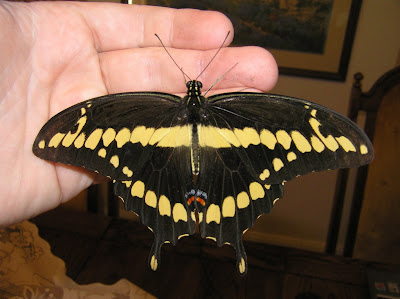 I caught this guy hanging out on my neighbor's lantana. He (or she) was cooperative enough to let me get this photograph.

As beautiful as these insects are, they are sometimes considered pests to the citrus industry because citrus trees are a host plant for giant swallowtail caterpillars. I, on the other hand, might plant a lemon tree just to attract more of these guys.
Posted by Thomas at 7:53:00 PM No comments:

Because you're never too old, Part II

In addition to GeoTrax, I have also been putting together a considerable Rokenbok collection. I consider Rokenbok to be perhaps the greatest toy so far invented by humankind: it's a construction toy, a remote-control toy, a model train and an action toy all rolled up in to one. I started collecting Rokenbok before Kirby was even born, but due to his age didn't really start playing with it and him until earlier this year.

Over the summer, the Rokenbok company issued a "monorail building challenge:" build and create a video of an original and unique Rokenbok monorail system, and have a chance to win a $100 Rokenbok gift certificate. I decided to enter the challenge to have fun building and playing with Kirby (and to get some free monorail components in the process), so I cleared the living room floor at my parents' house (they were out of town for most of the summer), and set to work. Here's Kirby playing with what I came up with: 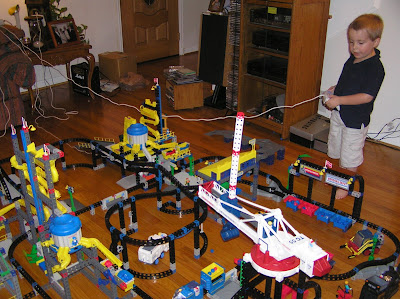 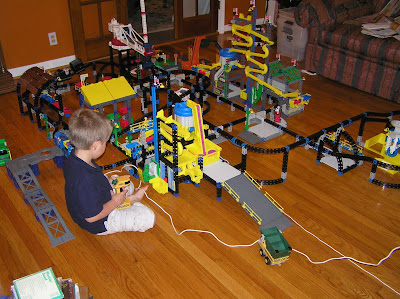 Even though Rokenbok is recommended for children ages six and older, Kirby has already mastered the remote control aspect of the toy: 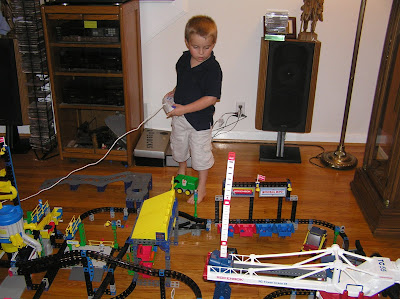 Needless to say, Kirby and I were very sad when the time came to dismantle the layout and return mom and dad's living room to its original state: 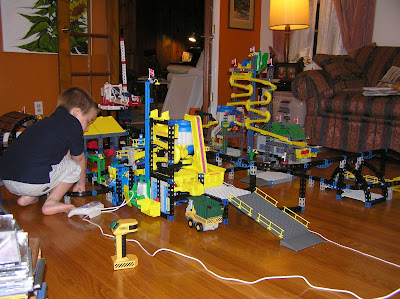 Here is the video I created, edited and submitted in time for the early September deadline:

I didn't think I had the technical expertise, the materials or (especially) the time to create a layout worthy of winning. I also wasn't satisfied with the quality of the video I submitted. Like I said, I didn't expect to win anything and, indeed, I did not come close to winning the popular vote held on the Rokenbok forums.

So imagine how surprised I was when I was informed that I had received the "Judge's Award," bestowed upon my design by a panel of Rokenbok employees who decided that my layout best demonstrated "all of the capabilities of the Rokenbok Monorail System and how it interacts with the rest of the Rokenbok world." Needless to say, I was pretty pleased. Not only did it mean a $100 Rokenbok gift certificate - more stuff for me and Kirby - but I have now been officially declared a "King of the Rok" by Rokenbok creator Paul Eichen himself!

That being said, I'm not merely being humble when I say my design was honestly not the most complicated or inventive. Take a moment to view some of the other entries in the contest. Some of the designs that were submitted are nothing short of amazing.

I realize it's been exactly one month since I last updated this blog. As I mentioned a couple of months ago, things are happening in both my personal as well as my professional life right now such that blogging is going to be light for awhile.

I'm still here, however, and I'm still following the University of Houston Cougars as they make their way through what so far has been an extremely exciting season.

It's probably a good thing that I was too busy to write an entry about Houston's soul-crushing 41-58 loss to Texas-El Paso back at the beginning of October. In one game, the team managed to undo everything that they had accomplished by beating Oklahoma State and Texas Tech. The Coogs dropped out of the top 25, their shot as a "BCS Buster" ended, and whatever slim chance quarterback Case Keenum had to win the Heisman Trophy vanished. The Cougars simply weren't mentally prepared for what was clearly a "trap" game, and UTEP, which is otherwise not a very good team, took full advantage of the opportunity. The Houston defense was particularly pathetic, allowing Miner RB Donald Buckram to amass an embarrassing 262 rushing yards and four touchdowns. Not even Case Keenum's 51 pass completions, 536 passing yards and five touchdown passes could make up for the rest of the team's poor performance. In one game, the Cougars went from being a potential top ten team to a team that was now not even in control of its own destiny to win its division.

Going in to a tough out-of-conference showdown against SEC opponent Mississippi State in Starkville, there was plenty of concern as to the effect of such a devastating loss on such a young team. Could they put the loss behind them and refocus? Or would the team take a nosedive? "The Coogs can still have a great season. They can win Conference USA and go to a bowl and be remembered as the team that continued to put UH football back on the national map," wrote Chronicle columnist Richard Justice shortly after the loss. "In the end, they'll be judged more on what they do after UTEP than what they did against UTEP."

If that's the case, then so far the Cougars deserved to be judged well. Since the UTEP debacle, they've rattled off three straight victories: a 31-24 defeat of Mississippi State (putting the Coogs at 4-0 for their nonconference schedule and 3-0 against teams from BCS conferences), a 44-16 beatdown of Tulane in the Superdome (the Cougars only led 9-6 at the half, but scored 20 unanswered points in the third quarter; I made the trip and had a great time at the game, on Bourbon Street and at Mother's), and, last weekend, a 38-15 homecoming victory over Southern Methodist.

Case Keenum did not put up his usual numbers gainst SMU; he "only" completed 25 of 36 passes for 233 yards and one touchdown, but in the end it didn't matter. The Cougar running game racked up 161 yards on the ground, and the defense recovered three SMU turnovers and held the Mustangs to o-for-10 on third-down conversions. SMU didn't even find the endzone until the fourth quarter, when they tried to mount a late rally, but a Charles Sims touchdown run with less than six minutes remaining sealed the win for the Cougars.

So now the Cougars find themselves bowl-eligible at 6-1 and are ranked 17th in the AP poll and 16th in the Coaches poll. There's still a lot of football left to be played, however, starting with a game against the always-tough-to-beat Southern Mississippi Golden Eagles at Robertson Stadium on Halloween. They then have back-to-back road games against the Tulsa Golden Hurricane and the Central Florida Golden Knights (we'll call this portion of the schedule the "Golden Trifecta...") before returning home to play Memphis and Rice to end the season. And the Coogs still need UTEP to lose at least one more game in order to reclaim the driver's seat in Conference USA's western division.

But one thing is for certain: so far, and even in spite of the ignoble loss to UTEP, the Cougars have exceeded everybody's expectations for the 2009 season. Here's to hoping that they can keep it up.
Posted by Thomas at 10:20:00 PM No comments: