With another season in the books, here's my annual update of the wins-versus-attendance graph for UH Cougar Football: 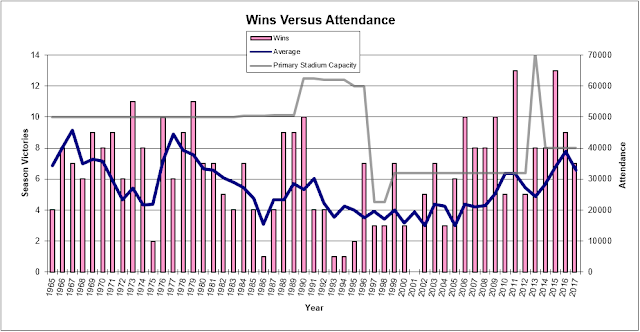 The cougars averaged 33,250 fans per home game in 2017, which is 5,703 fans per game fewer than the 2016 season. This drop-off isn't particularly surprising: the 2016 season was by all accounts a disappointing, deflating one, and the 2017 season wasn't much to get excited about either (this is evidenced by the fact that the Coogs drew steadily smaller crowds as the 2017 season progressed).

While it's not time to panic yet - 33,250 is still a pretty good average by Houston's historical standards and larger than any crowd that could have been accommodated at old Robertson Stadium - it's clear that significant adjustments are going to need to be made to this team if they are to recapture the interest of this city's notoriously fickle, fairweather fan base and put more butts in TDECU's seats next season.

This starts with an improved, high-scoring offense that people will want to pay money to see, rather than the predictable, sputtering system that the Coogs ran this past season.

Fewer 11 am kickoff times would help, too. Those kill attendance, especially in September.
Posted by Thomas at 7:25:00 PM