I promise, this will be the last post about the hungry caterpillars. At least until I find more of them hanging out in the garden...

The second butterfly came out of its chrysalis earlier this week. This time, I was actually in the dining room when it emerged. But I still didn't actually witness it. There's obviously no prolonged struggle involved in getting out of the chrysalis; they just pop right out of the shell. Here's a picture of the newly-emerged butterfly drying his wings: 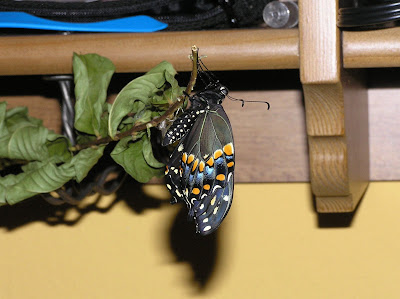 These guys only need about an hour and a half or so to fully dry and harden their wings. Naturally, they're not very active during this time. But once they're ready to go, they start to become very active and restless. This guy wasn't quite as docile as the one that emerged before. 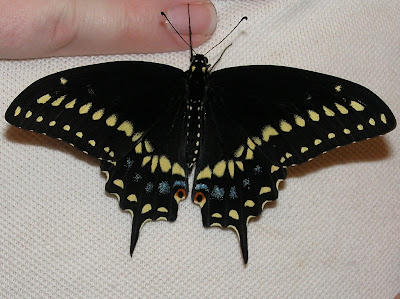 We released this one a few hours after it emerged, and it immediately flew away. Thus ends our encounter with this very attractive insect. As I've said before, I'd like to see them again sometime.

I'm not the only person whose garden has recently been visited by this animal.
Posted by Thomas at 11:50:00 PM