And then there were six...

Kelvin Sampson stood atop a ladder and yanked loose the remnants of the net from the rim. He turned toward the red-clad Houston fans and started pumping his right fist, the net clutched in that hand the entire time.

Years of building a once-proud program back to prominence, of putting together a formula that was about way more than flashy offense — it all led to this breakthrough moment for Sampson and the Cougars.

Yes, Houston is going back to the Final Four for the first time since the famed “Phi Slama Jama” era after Monday night's 67-61 win against Oregon State.

It wasn't easy. The team needed an almost-miraculous comeback against Rutgers just to make it to the Sweet Sixteen, fought past a formidable Syracuse squad, and had to fend off a furious second-half rally from Oregon State to secure their spot in the Final Four. Even then, some in the sports media are discounting the Cougars because of their "historically easy" path to the Final Four, due to the number of upsets in this year's tournament (as if the Coogs have any control over which teams they face in their bracket).

The Cougars, rightfully, are not apologizing for how they got to their first Final Four in 37 years; all that matters is that they're one of the last four teams standing. A lot of UH faithful, myself included, had all but given up any hope of this ever happening again because for so many of those 37 years the once-storied UH basketball program was mired in mediocrity, if not outright irrelevance. Losing seasons piled up during the Brooks-Drexler-McCallum Era of Suckitude, and fans stayed away even during the slightly-less-awful Penders-Dickey Era of Mediocrity. The Coogs made the NCAA tournament just once between 1992 and 2018. Fans referred to Hofheinz Pavilion as "The Tomb."

When the University of Houston hired Kelvin Sampson - a move that was controversial at the time due to Sampson being sanctioned by the NCAA - I wondered if he could resurrect the UH basketball program. The answer is a resounding yes. As Richard Justice explains, Sampson saw the potential of this program:

If some saw the University of Houston as a lost cause, Sampson believed it was a perfect next stop. “I wanted to invest in a program where I could fix something,” he said.  “I needed to rebuild a program. I needed to go somewhere where they needed me.”

Sampson remembers interviewing for the position, and former UH athletics director Mack Rhoades bluntly laying out the sorry state of affairs. UH had been trying for years, without success, to raise money. Without a significant investment in new facilities, there was no clear path to success. “I said, ‘That’s all? We can get that. That can be built. Those things are attainable,’” Sampson said. “Let’s just say I wouldn’t take no for an answer. Mack never told me no after I shared the vision with him.”

While Sampson worked on the product, the University worked on upgrades to the former Hofheinz Pavilion and a new practice facility to the tune of $80 million. The team started winning again. Fans started coming back (or at least they did, pre-COVID). The Coogs won their first NCAA tournament game in 34 years in 2018. In 2019, they made it to the Sweet Sixteen.

And now, here we are.

As a long-suffering UH alum, I couldn't be happier for the program, the players and the coaches.

The Cougars face former Southwest Confrence foe Baylor on Saturday for the opportunity to play in the national championship game. Baylor is certainly one of the best teams in the country, so I don't know if the Cougars can go any further than they already have.

Is rush hour over?

This NBC News segment from last week is notable for two reasons: first, it features Craig Raborn, the Houston-Galveston Area Council's* new Director of Transportation. Craig takes over as the Director of the local Metropolitan Planning Organization from Alan Clark, who retired last fall after serving as Director for 37 years.

Second, this segment alludes to one "great unknown" of life after the COVID-19 pandemic. Coronavirus has had an obvious effect on traffic, especially during rush hour commutes; but as it ends, and as people resume "normal" activities, will "rush hour" return? Or will people continue to work remotely, rendering rush hour as we know it obsolete?

If the pandemic has proven anything, it is that mass telework is possible, and businesses may choose to continue doing it even after the pandemic is over. That would suggest that there may be less rush hour traffic in the future.

On the other hand: after 13 months of working remotely, people might also be ready to get back into the office, to meet with their co-workers face-to-face, to not endure endless awkward Zoom and Teams meetings. If that's the case, then rush hour in late 2021 could be just as bad as it was in 2019. In fact, it could even be worse, if people decide that - even after the pandemic is over - they're not comfortable using carpools, vanpools, public transportation (or any other conveyance where they're in close proximity to other people) to get to work.

Nobody knows for sure what commuting patterns will look like once the pandemic ends. Hopefully we'll know the answer sooner rather than later.

In the meantime, please get your vaccine once it becomes available to you.

*full disclosure: I am an employee of H-GAC and Craig is my boss's boss's boss.

Here's a comic by The Oatmeal... 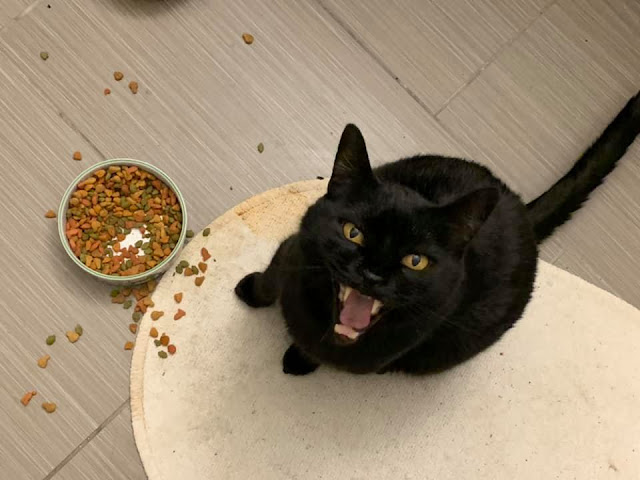 Plenty of cat food still in the bowl. Even lots of food strewn all over the floor (because he's a messy eater).
But he wants more food. Because he can see the bottom.
Posted by Thomas at 11:18:00 PM No comments:

Getting in the vaccine line

It's March, meaning that we're coming up on the one-year anniversary of the Coronavirus pandemic and related social distancing measures that have completely upended our daily lives. Fortunately, with the vaccine rollout now well underway, there is hopefully a light at the end of the tunnel.

My parents got their second shot of the Moderna vaccine last weekend (they were supposed to get it two and a half weeks ago, but there was a delay due to the freeze). That they are now both fully immunized comes as a great relief to me, as COVID could very well be fatal to them were they to catch it (and I'm thankful that they've managed to avoid it for an entire year).

Corinne's mother, likewise, is due for her second shot in a couple of weeks.

Earlier this evening, working on a tip from one of her co-workers, Corinne found and made vaccine appointments for both her and myself. The appointments are for two weeks from now, and they're down in Brazoria County, but we don't care. We've found our shots!

(This, incidentally, is the only time being obese will ever be a health benefit for me.)

And not a moment too soon. Thanks to Governor Abbott's stupid and reckless decision today to reopen the state "100 percent" and stop mandating mask use, Texas is likely to see a significant spike in COVID cases - and deaths - in the coming weeks.

But hey, anything to get people to stop being angry at you about the state's power grid completely collapsing a couple of weeks ago, right, Guv?

Assuming that the pandemic is over by the time the next football season starts and the Cougars are actually able to play a full season's worth of games, this is what it will look like:
Sat Sep 04     Texas Tech (at NRG Stadium)
Sat Sep 11     at Rice
Sat Sep 18     Grambling State
Sat Sep 25     Navy
Fri Oct  01     at Tulsa
Thu Oct 07    at Tulane
Sat Oct 16     (off)
Sat Oct 23     East Carolina
Sat Oct 30     SMU
Sat Nov 06    at South Florida
Sat Nov 13    at Temple
Fri Nov 19     Memphis
Sat Nov 28    at UConn
There are a few things about this schedule that work in UH's favor. The Coogs don't leave the City of Houston for the entire month of September. They get SMU and Memphis at home. They avoid Central Florida and Cincinnati altogether. The only non-Saturday home game is a Friday-before-Thanksgiving matchup against Memphis. Houston gets their bye week right in the middle of the season, where it's likely to do them the most good.
There are some drawbacks as well. There are two sets of back-to-back road games, and the Cougars only play one game at home in all of November. The end-of-season trip to play no-longer-a-conference-mate Connecticut was something of an act of desperation; there was apparently no other FBS school available to fill out the schedule.
Most significantly, this schedule is not going to sell a lot of season tickets. The closest thing the Cougars have to a "marquee" home matchup, against former SWC foe Texas Tech, has been moved to NRG Stadium. The team's true "home" slate is not going to excite the average sports fan, although Grambling State's band will be fun to watch.
With that said, this is a schedule that the Cougars should be able to do well against. It's definitely easier than the slate they faced in 2020 (even though they only played a portion of it): only three opponents on this schedule had winning records last season, and the Coogs get two of them at home. Having all four September games in the city is an advantage to a team that needs a fast start to the season.
The Cougars need to start winning gain. This schedule gives them the chance to do that. If the 2021 squad cannot notch a winning record against such a relatively weak lineup, then it will almost certainly be time to declare the Dana Holgorsen experiment a failure.
Joe Broback predicts anywhere between 6 and 9 wins for the Coogs with this schedule. Ryan Monceaux shares his thoughts as well.
I'm just hoping that this fall we'll be able to tailgate again.
Posted by Thomas at 11:22:00 PM No comments: