For the next few days, at least. Yesterday Lori left to attend the annual convention for her wine-tasting gig. She'll be hanging out in Sonoma, touring wineries, rubbing shoulders with fellow consultants and enjoying the cool northern California climate until Wednesday. It's a mini-vacation for her, one that she's been looking forward to for awhile.

My parents also left town yesterday, finally embarking on their long summer trip out west. They had been planning this trip for months but, as I noted in a previous post, it was delayed for several weeks by dad's back surgery and subsequent recuperation. Fortunately, the surgery seems to have alleviated dad's sciatica and, after six weeks of recovery, he got the go-ahead from his doctors to resume normal activities. My parents re-worked their itinerary - the only date that was unchangeable was August 10th, the day they had to be in Seattle to catch their Alaskan cruise - and began preparing and packing for their long-delayed departure.

And then a second setback occurred.

Early last week, my dad decided to drive down to the coast to get a day or two of fishing in before the big trip began. He was driving his Mountaineer and towing his camper as he crossed the State Highway 332 bridge between Freeport and Surfside when he abruptly came upon pickup truck whose driver apparently realized that he was going the wrong way and decided to make a u-turn at the base of the bridge. There was no way for my dad to stop in time or otherwise avoid a collision. The impact occurred, and this was the result: 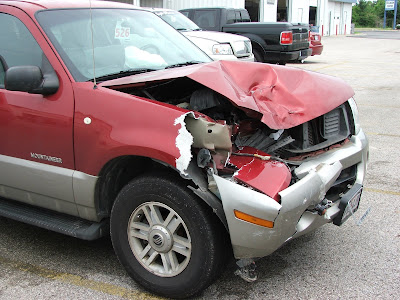 As bad as this looks, my father walked away from the crash with nothing more than a couple of minor bruises. All the safety equipment built into the vehicle - the seat belts, the airbags, the front-end crumple zones - worked as designed; my dad marveled at the fact that the airbags didn't even do so much as knock his glasses off. Neither my dad nor his doctors feel as if the accident caused any aggravation to his back, either. The driver of the other vehicle, which also sustained considerable damage, was uninjured as well.

Other motorists witnessed the accident and stayed at the scene until police arrived. It was quickly determined that the other driver, having blocked the entire highway while attempting an illegal u-turn, was at fault. The other driver's employer (he was driving a company vehicle) had valid liability insurance.

But the Mountaineer was obviously totalled. And without an SUV, there was no way to tow my parents' camper. The entire trip would be in jeopardy unless the vehicle was quickly replaced.

Fortunately, my father did not receive a great deal of hassle from the other driver's insurance company, who quickly accepted that their party was at fault and wrote off the Mountaineer at a price that was well above Blue Book value. The next obstacle was to find a suitable replacement vehicle; once again, it was fortunate that my father had a long-running relationship with a salesperson at a local Mercury dealer which resulted in the procurement of a new Mountaineer without any of the annoying, high-pressure sales claptrap that usually accompanies new vehicle purchases. The Mountaineer was replaced, the trip was salvaged, and right now my mom and my dad are making their way towards Seattle. They'll spend a couple of days in Denver visiting my brother and a couple of days at Yellowstone and Grand Teton National Parks on the way.

After their cruise, they will spend several weeks traveling from one RV park to another along the Pacific Coast; eventually they'll make their way down to San Diego and from there begin their journey home. They don't expect to return to Houston until early October.

Good for them. It's their retirement, and they should enjoy it. And I hope that all goes well during their travels; they've suffered enough crises already.

Anyway, the fact that both Lori and my parents are gone means that I am solely responsible for Kirby's care over the next few days. And that's fine, other than the fact that an adult can only tolerate so many viewings of Finding Nemo and Cars before insanity ensues...
Posted by Thomas at 11:27:00 AM