Lori and I have gone several days without Elektra, and we miss her. It's difficult to get used to her not rubbing our legs or sleeping at the foot of our bed anymore.

In retrospect, it's reasonable to ask why we allowed our cats to roam freely outdoors in the first place. Had we kept them inside, after all, Elektra wouldn't have been run over because she never would have been out in the street. And therein lies a sad irony: Lori and I originally intended Athena and Elektra to be indoor cats precisely because of all the hazards that cats face when they go outdoors. When we lived in our apartments in Austin and Lewisville, their only trips outside were onto the patio.

But, in reality, it's hard to keep cats indoors all the time. Especially when they sit at the door meowing incessantly for hours on end and they try to escape every time you open the door. We began to relent and start letting them outside for brief periods when we had our townhome in Denton with its own yard. They became indoor-only cats again when we moved into our apartment in Midtown Houston, but once we bought our own house it again became difficult to justify confining them indoors. We just had more important things (fixing up the house, taking care of Kirby) to worry about and so the cats began to come inside and go outside as we pleased.

Elektra was a very curious cat and she liked to go across the street to see what was going on in other peoples' yards. We weren't too worried about her getting run over, because we were naive and thought "our cat isn't stupid; she'll get out of the way if a car comes." Maybe so. But as cats grow older and become a step slower, they don't always get out of the way in time. And I think that's what happened with Elektra, especially considering that so many moron drivers speed through this neighborhood without really paying attention.

We know we can't confine Hermes III indoors. But, as of Sunday, Athena is once again an indoor-only cat.

Last Sunday evening, we laid Elektra to rest in our front yard. Here's the story:

Earlier this year, after being told by two different arborists that it was diseased and would fall over sooner or later, we cut down the large, old water oak in our front yard. It had already shed a few branches and we just didn't want to risk more limbs falling on roofs or on people, especially as another hurricane season approached. However, the operation left our yard completely devoid of trees. We realized that we needed to replace the oak (we do live in a subdivision named University Oaks, after all), so a couple of weeks a 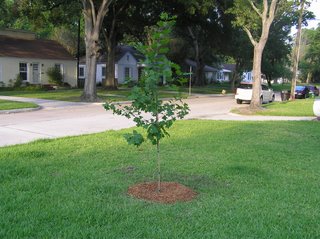 go we purchased a Quercus shumardii sapling. We intended to plant it last weekend, and we did so.

However, the young oak is no longer just a replacement tree; we decided to also make it a living memorial to Elektra. She is buried directly underneath the tree, and as her body decomposes and fertilizes the soil, she will provide sustenance to the roots of the growing tree: she will, in essence, become this new tree. Her collar and tag, in fact, now hang around the tree's slender trunk.

It sounds like a nice memorial to Elektra. I'm so sorry to hear about this; it's been a little over three months since I lost Boris and there are days where his absence is still shockingly painful. But I suppose that is part of remembering.

I think I cry at least once everyday.

Thanks for the kind comment, John. I remember reading your post about how one of the first things you had to do after you got back from a trip to Paris was to pick up Boris's cremains from the vet, and I thought about how sad that must have been for you.

As Lori notes, it's still a difficult adjustment for us. Elektra was a wonderful pet and we miss her.