Yesterday my brother and a couple of friends drove up from Denver to Fort Collins to witness another heartbreakingly-close loss for the Cougars. The Cougars had rallied back from a 17-point halftime deficit and, with eight seconds left, were in position to send the game into overtime with a field goal. However, the Coogs decided to take a shot into the endzone before sending out the field goal unit, and Case Keenum's fade route to LJ Castile in the corner of the endzone was picked off by Colorado State defender (and son of Houston Texans head coach) Klint Kubiak, ending the game.

In my preseason outlook, I expected the team to be 2-2 right now, with losses to OSU and one of the two MWC schools. I thought that it would take time for the team to adjust to the new staff's offensive and defensive schemes. I was also worried that the team would struggle with its weak spots at wide receivers and linebackers. As it turns out, all of those things have happened. Add in the disruption of the team's routine and concentration caused by Hurricane Ike - I remain convinced that last week's "home" game against Air Force should simply have been canceled - and there's little wonder why this team sits at 1-3 right now. 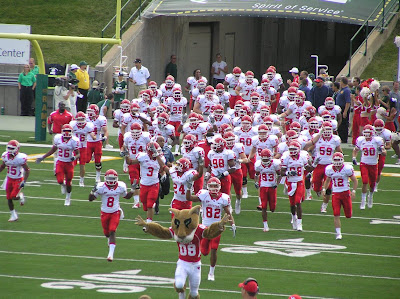 The weather yesterday was perfect for football. Colorado State has an excellent tailgating culture; other than a couple of drunken bozos (every school has a few), their fans were friendly and hospitable. 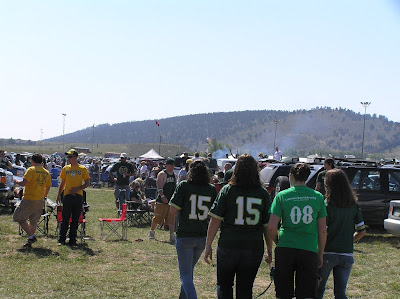 Colorado State's Hughes Stadium is a comfortable venue which sits at the foot of the Front Range; at a capacity of 34,400 it's only a little larger than Robertson. The school enjoys tremendous student stupport - the entire east side grandstand is reserved for students - and the band sits at the 50 yard line. 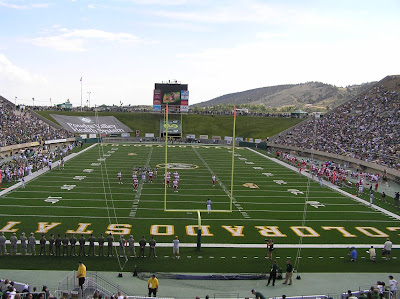 The offense started out slow; they sputtered for almost half the game and didn’t really get things going until the last drive of the first half. Receivers are still dropping easy passes. The O-Line is still having trouble establishing itself as an effective run blocking outfit (although to their credit they did improve as the game wore on). Quarterback Case Keenum did not have his best outing; he did pass for 380 yards and three touchdowns but also threw three interceptions, including the one that ended the game. 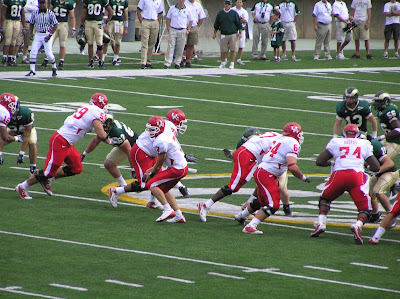 But the bigger problem is the defense. One thing that stood out to me was the way the UH defense was so physically dominated by Colorado State. The Rams' O-Line continually blew the Coogs off the ball. Going into the season I did not anticipate the degree to which this defense lacks size and speed. Also, it's become obvious to me that, just because somebody is a senior or a four-year starter, doesn't mean that they are an outstanding player. It's clear that the Cougar defense is going to struggle all season long. 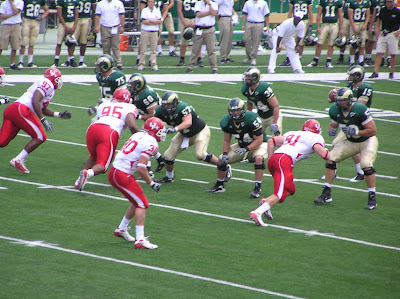 Then there's the Unholy Trinity. It's difficult for any team to win with a minus-4 turnover margin. And although the Cougar special teams otherwise played well, they made one critical mistake when they were unable to cover Colorado State's botched field goal attempt (on 4th and 16, no less) in the first half. CSU was able to convert the botched attempt into a first down, and that saved a drive that resulted in a touchdown. Those are the kinds of mistakes that teams need to be able to capitalize upon.

Given the way Coogs played in the first half, the fact that they rallied back and had a chance to win or tie the game at the end is rather remarkable and should be commended. I was also happy to see that the high altitude did not seem to take a toll on the team; in fact, they played better at the end of the game than they played at the beginning. But the Coogs simply can't dig themselves into big first-half holes and then expect to rally themselves out of those holes in the second half; they need to play with intensity from the very start.

I don't disagree with the decision to throw the ball into the endzone with eight seconds left. Why not take a shot at avoiding overtime on the road, if you can do it and if it's a safe play, i.e. either the receiver catches it, or the ball falls incomplete with a couple of seconds left for the field goal attempt? But the decision to throw the fade to LJ in the corner of the endzone was not a safe play. The Coogs had already done it twice, so CSU was ready for it. Furthermore, Case's pass to LJ was not well-thrown.
Next up for the Cougars is ECU in Greenville, which is going to be tough. Given the problems that currently plague the team - an offense that still makes a lot of mistakes, a defense that cannot stop anybody, and a team that starts out slow and allows themselves to fall behind early - it's becoming clear that this is going to be a long season for University of Houston football. Right now, my preseason prediction of a seven-win is beginning to look optimistic.
Posted by Thomas at 2:30:00 PM

wtf? no post about the ECU game? You got to give props where they're due! You gonna be in town for the UAB game? If we don't murdalize them I will be sorely disappointed!

yeah, yeah... I've been busy up here in Plano all week and wasn't able to put up a post about the ECU game until tonight.