I'm a native Houstonian, so I've seen a lot of heavy rain and flooding events over the years. But I'm not sure I've ever experienced anything quite like Monday night's deluge.


During the rain’s peak Monday night, Houston received nearly an inch of rainfall in just five minutes, and racked up nearly a foot in less than a day. The flooding in Houston was comparable to a landfalling tropical storm or hurricane. Water levels along Buffalo Bayou, which runs through downtown, eclipsed the level seen during Hurricane Ike in 2008, and was just shy of flooding during Tropical Storm Allison—the worst flood in Houston history—which dawdled over the city for six days in 2001 and inundated 70,000 houses.

(Full disclosure: I was living in Denton when Tropical Storm Allison occurred.)

I'm not sure how much rain I got at my house, but according to the rain gauge closest to my house, about 7 3/4 inches of rain fell between 8 pm Monday and 4 am Tuesday. It was an incredible amount of precipitation over a short period of time, and needless to say the City of Bellaire's drainage infrastructure was quickly overwhelmed.

My street flooded first. Then the water crept up to the sidewalks, then up to my yard, and eventually to my front porch. The threshold of my front door was a few inches higher than that, so I wasn't too worried about water getting into the house. But as the downpour continued unabated, the thought did cross my mind...

Here are some pictures I took of my front yard at about 1 am Tuesday. My camera's flash was useless (the light simply reflected off of the raindrops and obscured everything), so I took long exposure photos without the help of a tripod, which is why they're blurry. But these shots nevertheless provide a good idea of just how inundated my street became. 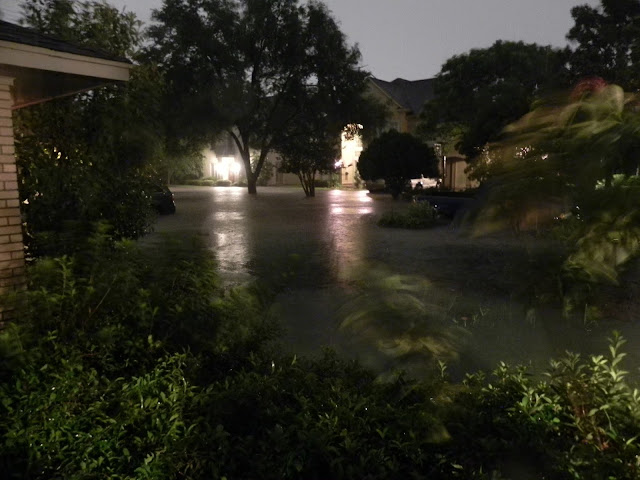 So much rain had fallen by the time I took these pictures that the waterline stretched uninterrupted from my doorstep to the doorsteps of my neighbors across the street. 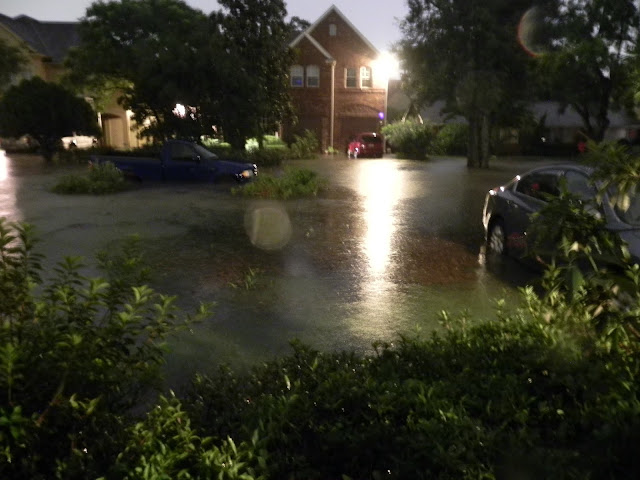 You can see my little gardens in front of my neighbor's kid's blue truck and a few blades of grass sticking out from the water near the center of this picture. Otherwise my front lawn was completely underwater. 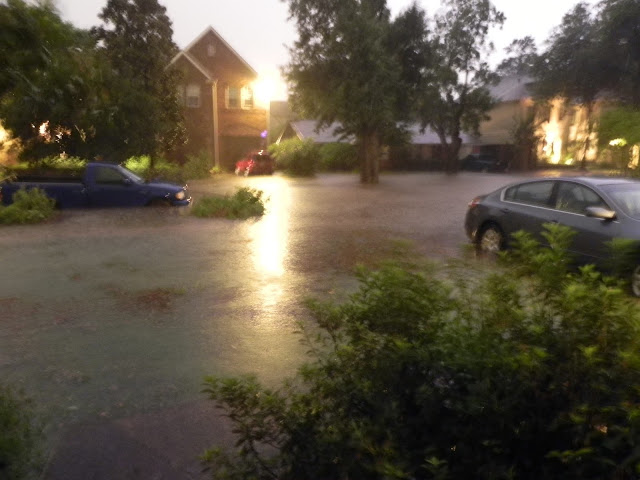 I caught a lightning strike while the shutter was open, which is why this picture is comparatively bright. The bottom of my tires are underwater, but thankfully the water never made it to my doors. Can't say the same for my neighbor's kid's blue truck, however; his floorboards got soaked. 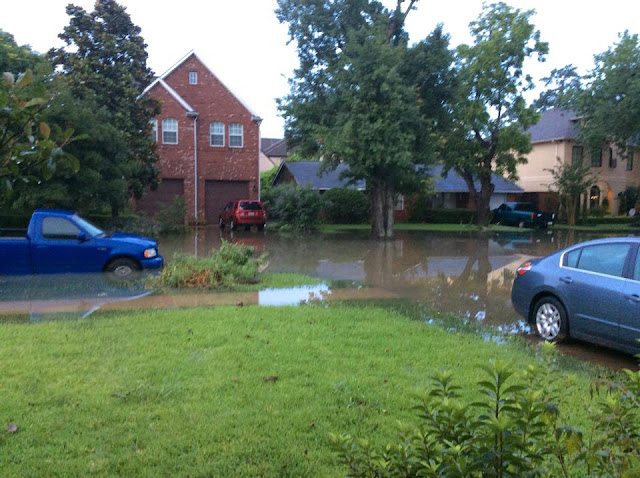 When the rains stopped and daylight arrived, I stepped outside to take a couple more pictures. The water had begun to drain off by then, but it woulds still be a few more hours before the street was passable and I could make it in to work. 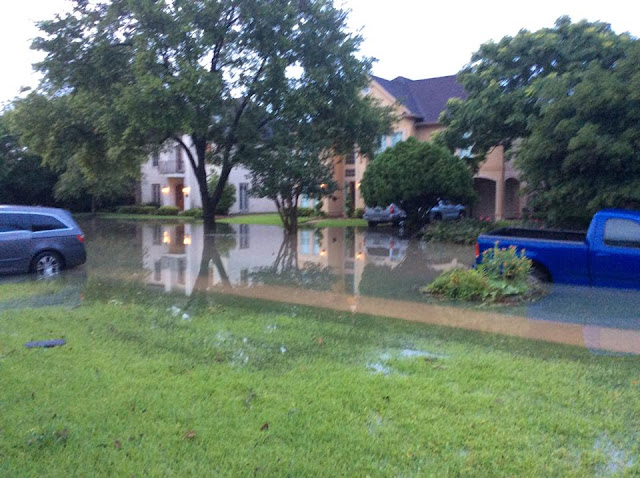 The good news is that the engine of neighbor's kid's blue truck apparently did not suffer any damage; the truck is still drivable. It remains to be seen what kind of harm the floodwaters did to my little gardens. That black thing at the left of the picture is somebody's water meter cover. It floated there and does not belong to anybody on my street.

My landlord contacted me Tuesday morning to make sure the house did not flood, and she was amazed yet relieved when I told her that the floodwaters managed to stay a few inches short of the front door. I didn't ask her if she had flood insurance; for what it's worth my neighborhood is in FEMA Zone "X" (the "500 year" floodplain) and flood insurance is not mandatory.

While my neighbors and I survived the flood unscathed, it's worth remembering that a lot of people didn't. The Chronicle's Eric Berger explains the forces that came together to create this mess.