The planned merger between American Airlines and US Airways (I wrote about it a few months ago) seemed to be just another routine step in the consolidation of the nation's commercial aviation industry. But then, a couple of weeks ago, the Justice Department stepped in:


Until this week, when the Justice Department filed suit to block the proposed merger of the airlines’ parent companies, it had been notably lax on airline mergers. What the antitrust division deemed acceptable — even beneficial — for Delta Air Lines and Northwest Airlines (in 2008), and Continental and United Airlines (2010), and Southwest Airlines and AirTran Airways (2011) now “threatens substantial harm to consumers,” the complaint says.

It does seem curious why the Justice Department, which has given its blessing to previous mergers that have substantially reduced the number of large domestic carriers, might draw the line with this one. Apparently, they think that American - US Airways is just one too many consolidations for the nation's travelers to bear:

Mr. Baer of the Justice Department told me this week: “We consider every merger one at a time. Here, we had a proposed merger that would reduce the legacy carriers from four to three. That’s not the same as six to five, or five to four. That logic would get you from two to one pretty quickly.”

And while he said he couldn’t comment on the earlier airline mergers, since he has been the antitrust chief for just seven months, “if you look at the net effects, what we’ve seen is a reduction in capacity and higher prices, and not the benefits that were promised.”

Whatever the recent precedents, the proposed American-US Airways merger violates the Justice Department’s merger guidelines, which the Obama administration finally seems to be taking seriously. The merger would substantially reduce competition because “there are too many routes that would create a monopoly or oligopoly,” Professor Hovenkamp said.

According to the Justice Department, the American-US Airways merger would substantially reduce competition in over 1,000 city pairs served by the two airlines. Among the more egregious examples it cited are Charlotte, N.C.-Dallas; Charlotte-Durango, Colo.; Dallas-Philadelphia; and Kahului, Hawaii-Tampa, Fla. It said the merger would create four out-and-out monopolies, albeit on secondary routes, including three that serve St. Croix in the Virgin Islands. And it said the merger would reduce competition on more than 1,000 routes.

It’s pretty clear what happens when concentration increases substantially on a route between two cities. After Continental and United merged, the combined airline accounted for 79 percent of the service between O’Hare International Airport in Chicago and George Bush Intercontinental Airport in Houston. During a three-month period after the merger, fares on that route were 57 percent higher than they were three years earlier, according to the aviation industry Web site PlaneStats.com. United’s fares overall increased 16 percent in the same period.

The Continental-United merger's affect on fares between IAH and ORD became apparent to me when I was pondering a trip to Chicago last October.

“Over and over, the airlines have merged, concentration has increased, and prices have gone up,” said Christopher L. Sager, an antitrust professor at Cleveland-Marshall College of Law, who warned about the effects of the American-US Air merger in testimony before the House Judiciary Committee in March “This is what economic theory would predict and it is, in fact, exactly what the carriers have done. They have no incentive to use higher profit margins to lower prices for consumers.”

I think a substantial number of flyers would argue that customer service has suffered, as well. After all, why make the extra effort to be nice to your customers if you know they don't have a choice?


Far from benefiting consumers, the department now states flatly, “increasing consolidation among large airlines has hurt passengers” because of higher fares, new fees and add-on costs, reduced service and fewer amenities. The complaint notes disapprovingly that the merged United and Continental “reduced capacity at nearly all its major hubs” and “at many other airports where the two airlines previously competed.”

But wait, I thought the reason United had to reduce capacity at its Bush Intercontinental hub was due to the horribly detrimental effect that Southwest's plan to fly internationally out of Hobby would create! United wouldn't have lied to us about its real reason for reducing capacity at IAH, would they?

Speaking of Southwest, it appears that the once-vaunted "Southwest Effect" no longer has the same cachet it once possessed:

Southwest, known for its discount pricing and regarded as a savior two years ago, no longer seems as significant a competitive threat to higher pricing. “Competition from Southwest, JetBlue or other airlines would not be sufficient,” the complaint asserts, suggesting that the antitrust division no longer views Southwest as a feisty upstart.

“When Southwest entered a market, it was able to constrain price increases, even in concentrated markets,” Professor Sager said. “The Justice Department took this seriously. But now empirical evidence is suggesting that Southwest has become such a large entity that it’s no longer a reliable constraint.” 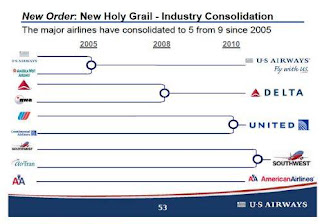 The bottom line is this: if this merger were to happen, the four biggest U.S. airlines — the combined American/US Airways, United, Delta and Southwest — would control more than 80 percent of the U.S. commercial air travel market (add in JetBlue and Alaska and you'll get to about 90 percent). These four largest carriers, furthermore, were reduced from nine carriers less than a decade ago (as the figure to the right indicates) It's the very definition of oligopoly, and it's just too much consolidation for the Obama Administration to feel comfortable with. It's also a signal that the benefits to air travelers that began in 1978 when the industry was deregulated have largely run their course. Even when dignity-robbing, bare-bones cattle carriers like Spirit or Allegiant are taken into consideration, there is simply no longer enough competition in the industry to continue to exert a downward pressure on airfares. (A useful compilation of commercial aviation statistics, including average domestic airfare over time, is here.)

Don't expect this fight to end anytime soon, however. American and US Airways are determined to become a single carrier, and battle lines are being drawn. This could play out in the courts for months, if not years. Matthew Yglesias, meanwhile, thinks that competition for domestic air travels could be revived by allowing foreign carriers to fly domestic routes: an interesting idea, but not within the realm of political feasibility.
Posted by Thomas at 11:52:00 PM