Noticed at the BNSF railyard near the University of Houston while driving home this afternoon: 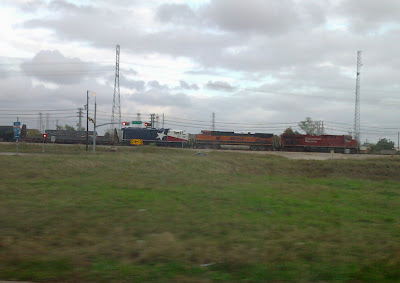 The locomotive painted like the Texas flag is a rare sight in Houston because it belongs to the Trinity Railway Express, which is a commuter rail line that runs between Dallas and Fort Worth. It is numbered TRE 120. According to the TRE's rolling stock datasheet, it is an F-59 PH locomotive purchased from Toronto's GO Transit in 2009.

Judging by what is clearly a shiny new paint job, I'm guessing that it's merely passing through town on its way from the refurbishment shop to TRE's yard. I sent an e-mail inquiry to TRE asking if this is the case and I'll update if I get a response.

I'm sure I'm the only person in the world that actually notices or cares about this. But I'm a transit geek so that's how I roll!