Here is a picture of myself, my brother David and my friend Joe before kickoff. We were happy at the time of this picture, which was taken by a member of Case Keenum's family. We weren't quite as happy after the game was over.
If the University of Houston Cougars wanted to prove to the world that they had indeed taken their program to the next level, then last Saturday night's game - nationally-televised, on the road, against a beatable opponent from a BCS Automatic-Qualifying conference - was one that they needed to win.


Instead, the Coogs did the exact opposite: they self-destructed. They showed to the college football world that they're not "there" yet. And, in the process, the Coogs lost both their starting and backup quarterbacks for the season.

Simply put, last Saturday's 31-13 loss to UCLA at the Rose Bowl in Pasadena was a disaster of epic proportions.

Given that the Coogs under Kevin Sumlin have historically been able to get themselves motivated to play, and beat, teams from BCS-AQ conferences - see victories against Oklahoma State, Texas Tech and Mississippi State last year - I'm not sure why the Cougars played as flat and as uninspired as they did against the Bruins that evening. Perhaps they saw the #23 next to their name and the 0-2 next to ULCA's name and thought the game would be a cakewalk. Maybe they found themselves in awe of California (a place several of the players had never before visited) and the storied Rose Bowl. Perhaps quarterback Case Keenum, who suffered a concussion the previous week against UTEP, was still not completely healthy going into this game, and perhaps the "will Kevin play" controversy that seemed to envelop the team over the past week was a source of distraction. Maybe Kevin Sumlin and his staff "coached scared" (in that regard, some of the playcalling was truly bizarre). For whatever reason, the Cougars looked so unprepared and out-of-sync that I truly felt like I was watching a Houston team of the Kim Helton or Dana Dimel eras.

Much credit has to be given to UCLA head coach Rick Neuheisel. His team clearly has a lot of talent and was better than their 0-2 record indicated. After being embarrassed at home 0-35 by Stanford last week, his team was out to prove itself. Also, much has to be said about the difference in size and strength between the two teams' lines. Until Kevin Sumlin and his staff can recruit the "big uglies" on both the offensive and defensive lines, the Cougars will always be at a physical disadvantage in the trenches when they face opponents from BCS-AQ conferences.

But the bad play was one thing. The loss of Case Keenum for the year was something else. Keenum injured himself the exact same way he suffered a concussion the week before - attempting to run down a defensive player after throwing an interception. Only this time, he turned his knee on the field and tore his ACL. His season, and most likely his college career, is over.

Although Case Keenum hadn't been "himself" since the end of last season - he had thrown 14 interceptions in his last five games - and although the "Keenum for Heisman" campaign was an unnecessary distraction (because Heisman voters will never give that trophy to a player from a non-AQ conference, regardless of how good he is), he was still the Cougars' most important player. Losing him is a crushing blow.

Especially considering that the backup quarterback, Cotton Turner, was also knocked out for the season after a UCLA player tackled him and broke his collarbone. That left true freshman Terrance Broadway to run the show, and in spite of the pressure put upon him (taking his first-ever college snaps, on the road, in the Rose Bowl, with his team trailing badly), he performed admirably, leading the Cougars to two scores including the team's only touchdown of the game.

Still, the game was a disaster. Houston's offense sputtered even before Keenum and Turner got knocked out. Keenum's interception came on 1st and goal, which made the play a game-changer in more ways than one. UCLA didn't have much of a passing attack, but they didn't need to throw the ball when they could torch Houston's poor run defense for 266 yards. The Cougar defense, to its credit, did manage to recover two fumbles and an interception, but that really only served to keep the score from becoming even more lopsided than it was.

Seriously: how many teams lose both their first and second-string quarterbacks in the same game?

Anyway, the parameters of this season have completely changed. Quarterbacking duties will now fall to either Broadway or David Piland, who is also a true freshman. Although I've heard strong reviews about both of them, you would ideally prefer to give these players a redshirt season to bulk up and gain experience. Now one or both of these young men will have to learn on the fly. Any lingering questions about Houston's defense have also been answered: they're no better than they were last year, especially against the run. And is the team's apparent lack of focus a regression to two years ago, when Cougars fell behind early in several games? Why didn't Kevin Sumlin have these players prepared for the game? And did he give up after Keenum went down?

Anyway, now that the "BCS Buster" and "Keenum for Heisman" distractions have been eliminated, maybe this team can regroup and focus on what matters: winning Conference USA. I think it's still possible. But it just got a lot harder. Needless to say, my preseason prediction of a nine-win season has now gone out the window.

Other than the game, my friend Joe, my brother David and I had a great time in LA. Friday we rode the subway to Hollywood, visited Little Tokyo, and had an amazing dinner at an Argentinean restaurant in Old Town Pasadena. Saturday morning we drove down to Santa Monica and spent some time there walking around and exploring. We found the tailgating scene out on the golf course to be delightful. And the Rose Bowl itself was pretty impressive: 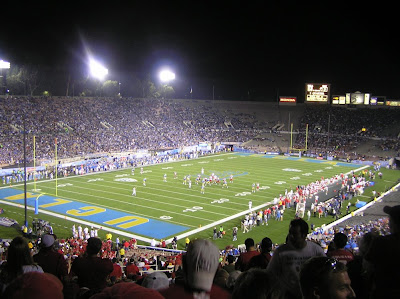 Indeed, the only thing that disappointed about the trip was the game itself.
Posted by Thomas at 10:12:00 PM