Due all the distractions and general busy-ness that I've experienced over the past few weeks, I've neglected to mention the two newest members of our family: 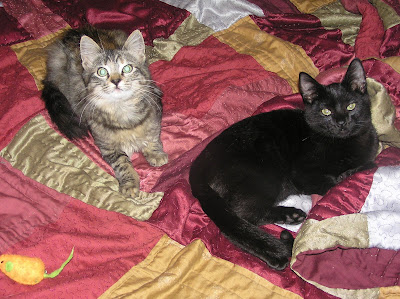 Meet Artemis, at the left, and her brother Orion. They've actually been with us since right after Thanksgiving; one of Lori's friend's relatives had found a litter of four kittens whose mother had died and sent out a plea for good homes. Since we were thinking about getting a new cat at some point (to replace Elektra), we obliged. Originally we were only going to take one kitten, but we ended up with two.

Artemis and Orion (as you might tell, I name all my cats after Greek mythology) seem to have adjusted well to life with us, although Athena and Hermes still aren't especially impressed with their presence. Surprisingly, Kirby hasn't shown too much interest in them, one way or another. That's probably not altogether a bad thing, though, since we debated as to whether Kirby was old enough to be around kittens. 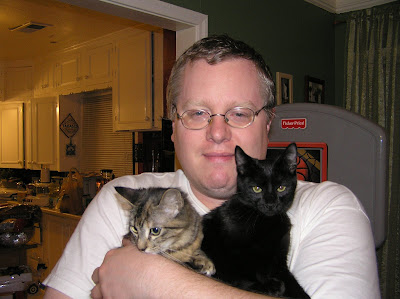 I've had many cats over the years, but Orion is the first one of this variety. Hopefully he'll bring me good luck, rather than the other kind...
Posted by Thomas at 4:32:00 PM