According to the Dubai Informer blog, the concrete skeleton of pyramid-shaped, 257-room Raffles Hotel near the Wafi City Mall has been completed and is on its way to its spring 2007 completion date. Since the Raffles hotel is near my office, I'm somewhat familiar with this project. This is what the Raffles hotel looks like right now; the concrete structure might be completed, but there's a long way to go before it opens. 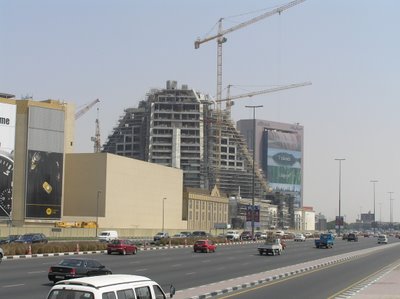 The story about another luxury hotel in Dubai, however, isn't what caught my attention; instead, the negative comments on the blog post from "screwed_mind" were rather interesting:

Perhaps fantesizing about skyscrapers is way better than wasting hours of your life in Shaikh Zayed Road's traffic on a daily basis. Ironically, most of the traffic is caused by all construction madness that is named "My Vision" by some! [...] Perhaps the best thing I can do is to wave at all these concrete monsters with the happiest smile ever on my face while taking off from Dubai International Airport.

Although it's easy to dismiss the rants of one angry commenter, these comments are illustrative of what I sense is "construction fatigue" among some residents of this rapidly-growing city. The city's existing infrastructure is increasingly overloaded as more people move to Dubai and more projects get underway. Housing is still scarce and expensive. Traffic is getting worse on a daily basis. Even projects such as the Dubai Metro, new creek crossings and road widenings which will improve the city's mobility in the long term add to traffic headaches in the short term as lanes are blocked and routes are detoured. Frustration is a natural reaction as peoples' day-to-day lives become aguably more difficult amidst all the bulldozers, construction cranes and cement trucks, and I've heard some people openly wonder if the city will actually be able to accomodate all the residents, businesses and tourists all this new development is expected to attract.

Any city, especially a city growing as quickly as Dubai, is going to experience growing pains. But it's fair to ask: does there come a point when this "construction madness" begins to become an overall detractor rather an an attractor? Will there come a time when people and businesses begin avoiding Dubai, citing the headaches and hassles caused by the frenzy of development and growth? Like so many other things about this fascinating city under construction, only time will tell.
Posted by Thomas at 1:54:00 PM

Seems like you are having a good time here in Dubai..