Okay, so now that I’ve been moved to a hotel with internet access (and “hot” water that’s actually hot, and a real restaurant, and a bathroom that doesn’t stink, and…well, you get the idea) hopefully I’ll be able to write entries on a more frequent basis.

The short trip back to Houston was a whirlwind of activity for me and I simply didn’t have time to write about everything I wanted to. For example, I never got to announce the newest member of our family, Sadie. 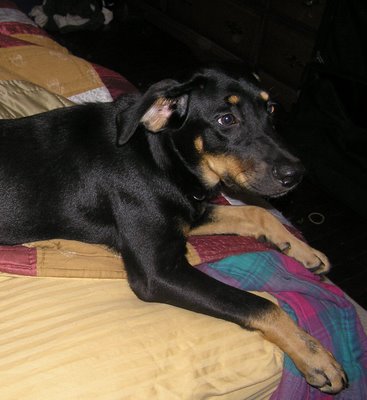 The name wasn’t my idea (it reminds me of Jodie Foster's character in The Accused). For that matter, neither was the decision to get a dog in the first place; as everyone knows, I'm really not a dog person. Lori's father and brother found the animal several weeks ago and managed to talk Lori into taking her, so Sadie is really Lori's dog.

Anyway, Sadie is believed to be about six months old; as you can see, she has doberman or rottweiler markings but we really don't know what mix of breeds she represents. She's very affectionate but also very hyperactive, which isn't suprising considering that she's still a puppy. And, so far, she and Kirby seem to get along: 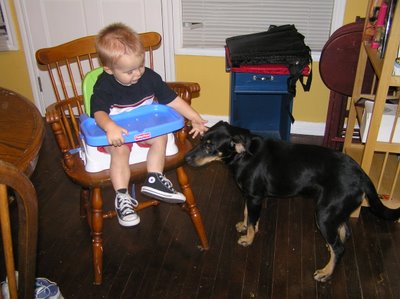 (The cats don't really care for her, but that's to be expected.)