The early part of this week has been a wet one in Houston. It rained heavily all weekend, and on Monday the city received its worst drenching since Tropical Storm Allison, as some parts of the city recieved well over ten inches of rain and flooding occurred in several areas around town. Although it wasn't quite as intense as Allison - some areas experienced over two feet of rainfall during that event - many houses nevertheless flooded and there was significant street flooding which snarled traffic all day and claimed a number of cars as well (especially since so many idiots in this city think their cars can drive through eighteen inches of water without a problem). The floodwater has since receded - unlike New Orleans, Houston does sit above sea level, if just barely, and stormwaters eventually drain out into Galveston Bay - and over the course of Tuesday the skies cleared up.

I would like to report that my house made it through the deluge unscathed. Unfortunately, I cannot.

No, the house did not flood. Braes Bayou stayed within its banks, and there was no street flooding in my neighborhood. However, the ceiling of my upstairs bathroom was nevertheless the victim of Monday's downpour.

That's because the vent from our heater protrudes through our roof at a point right above the upstairs bathroom. And it leaks. I've known about the leak for several months now, but until now it has been a very minor leak and I was never concerned about it enough to actually climb up to the roof and fix it.

However, Monday's rainfall was by far the strongest since we moved into this house. It rained non-stop from about four in the morning until about nine or ten o'clock - a good five or six hours of hard, driving rain. And that minor roof leak quickly turned into a leak strong enough to completely waterlog the drywall ceiling of the bathroom right below it. Water began bubbling and seeping through the ceiling Monday morning. That evening, realizing it was ruined and could collapse at any moment, I pulled the rotten and soaked drywall down, leaving a huge hole in the bathroom ceiling.

Fortunately, it's just a single 4' x 8' board of drywall; floating and taping a new sheet of Sheetrock shouldn't be too much of a problem. But before I do that, I need to climb up on top of the house with some roofing tar and see if I can remedy the leak itself.

Oh, well. This is what my lazy ass gets for not doing something about the leak sooner.

Not everybody in this house thought that the heavy rainfall of the past few days was a bad thing. Kirby was completely fascinated by last weekend's showers: 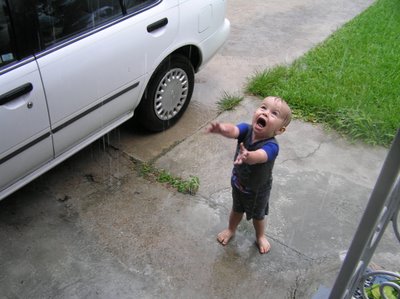